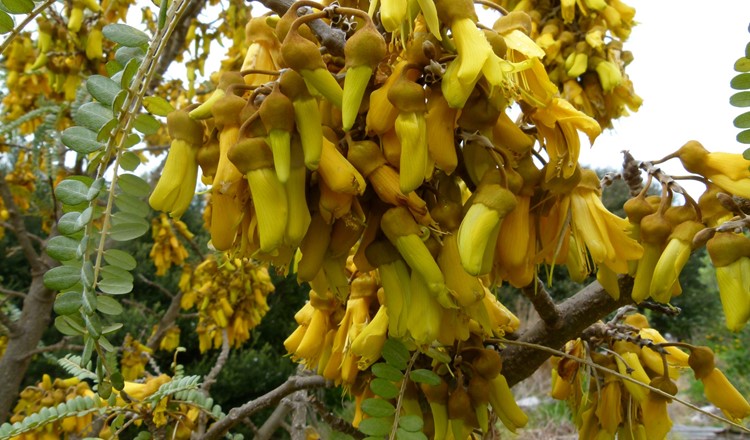 During October there were two water taxi trips out to Motuihe involving 16 adult volunteers and 10 regulars. 230 trees were planted all meeting the Trees That Count criteria.

The next volunteer days are:
The Motuihe wharf is presently closed for repairs/upgrade with no date as to when it will be back in use. Therefore all volunteers will need to land at beaches by water taxi or private boats. Water taxi trips are being arranged for groups of less than 11 passengers on an ad hoc basis. If you would like to volunteer please register your interest by sending an email to info@motuihe.org.nz.
New Website Goes Live!
Lois, Fiona and Hazel have been working away in the background for the last few months to redesign and freshen our website. Video clips have been inserted and hopefully the new look is more inviting and will encourage more people to visit Motuihe and maybe volunteer. Have a look, the address is the same.  www.motuihe.org.nz.
Photos of Sunshine Health Camp
We would love to have some photos to go on our new website of children at the Sunshine Health Camp operating during the 1930s . If anyone has any contacts for people who may have had relatives at one of the camps we would love to hear from you. Email: info@motuihe.org.nz.
Motuihe Trust AGM
Will be held at the Outboard Boating Clubrooms on Tamaki Drive on Monday 25 November. The board members have business to deal with at 6 pm and everyone is welcome to attend if you wish. The AGM will start around 6.30 and will be followed by a speaker  at 7 pm. The speaker has not been confirmed but it will probably be a seabird expert.
Wharf and House update (no change)
DOC is waiting for a final report from the wharf engineer and in the meantime the wharf is closed until repairs/upgrade are completed. DoC has indicated that the wharf will not be available for ferries this side of Christmas.
The temporary buildings to replace the house have not been ordered as DoC are awaiting approval from Wellington.
Woolshed steps rebuilt
The steps inside the woolshed have been widened and strengthened. Big thanks to Brian Alexander for carrying out this overdue improvement. 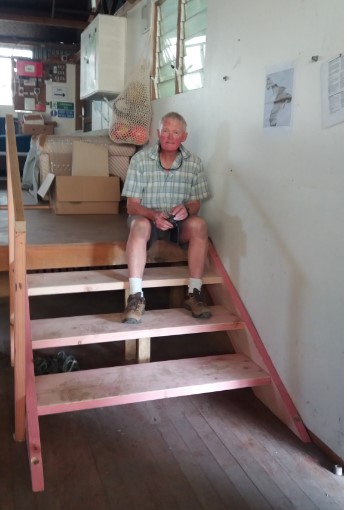 Training for new kiosk helpers:
Monday 4 November 7.15pm at OBC,   7 Tamaki Drive. For volunteers interested in spending a few days on the island over the summer, helping in the information kiosk and selling ice creams.  If you have not registered yet or want more details contact  Hazel:  hazel@breakthroughstrategies.co.nz.
Mothplant:
I'm sure our volunteers are very much aware of the problems caused on Motuihe by mothplant.  At the recent Auckland Council Pestival, it was interesting to see this organisation represented.  As we drive or walk around Auckland streets, work car parks, parks and reserves, neighbour's properties we can assist by taking note of moth plant locations and email STAMP.
Society Totally Against Moth Plant (STAMP)
Email if you want to report a moth plant location. This organisation does require many more active members. People who walk, cycle and drive around and see moth plant, and also lots of people who would be happy to be actively weeding. Even an hour a week from each person would be awesome. if so, join their group.
Contact email: mothplantlocations@gmail.com
Facebook: Society Totally Against Moth Plant
Motuihe Mugs
Want to give a Motuihe Christmas gift to family, friends, visitors, work colleagues?
We now have blue Motuihe mugs printed with our Tuatara & Kakabeak photos available for purchase @ $20 each plus postage & packaging (p&p price to be advised on receipt of order).
To order a mug please email your order through to accounts@motuihe.org.nz and once confirmation is received back which will include the bank account details, you can direct credit the cost including postage to the Trust account. 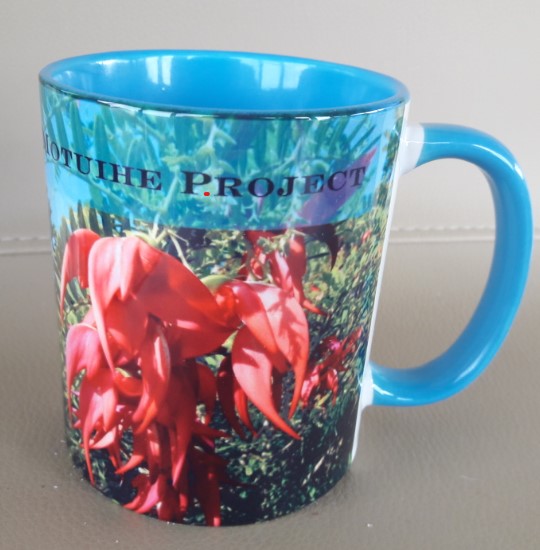 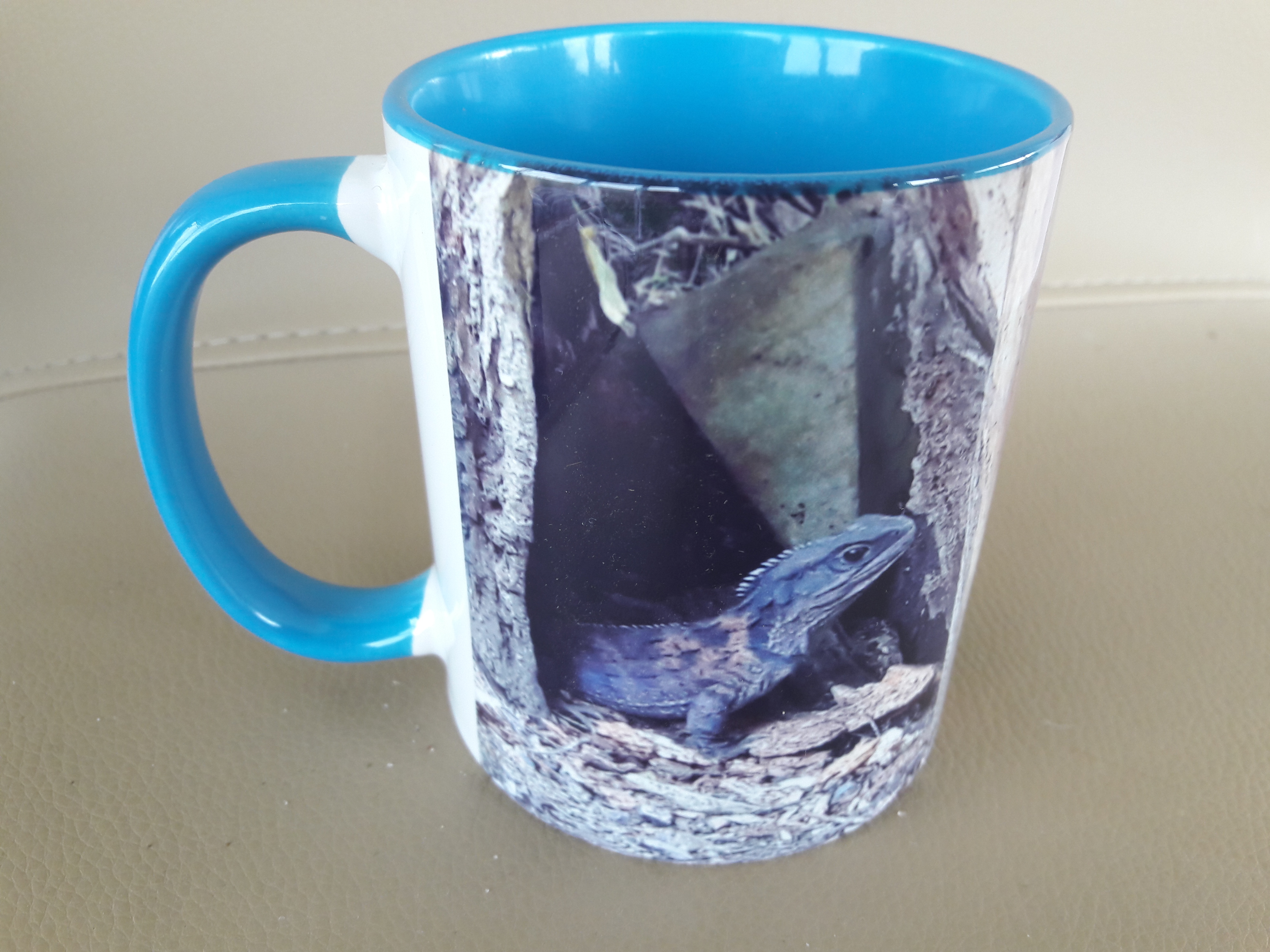 While doing research in the ACC archives I came across a series of letters about bell birds on the island. With the removal of the quarantine station status and the opening up of the island to the public, there was a concern that the bell birds might be at risk. There was an application in 1929 to take the birds to Waipoua forest but it was declined. However, the minister of health at the time was advised that the number of bell birds on the island was "quite considerable" so no further action was required. There was a further letter from the Navy in 1941 inquiring about the birds and whether they had been liberated there. The town clerk replied that they had not and it was thought that they had made their own way from Little Barrier and because of the prohibition of dogs on the island, had multiplied. When the Trust was set up in 2000 there were virtually no bell birds on the island.  In 2010 the trust released 50 bell birds but most flew to neighbouring islands. In recent years some of our banded birds have been seen on Motuihe so they may steadily return when they realize what a paradise Motuihe is for them! 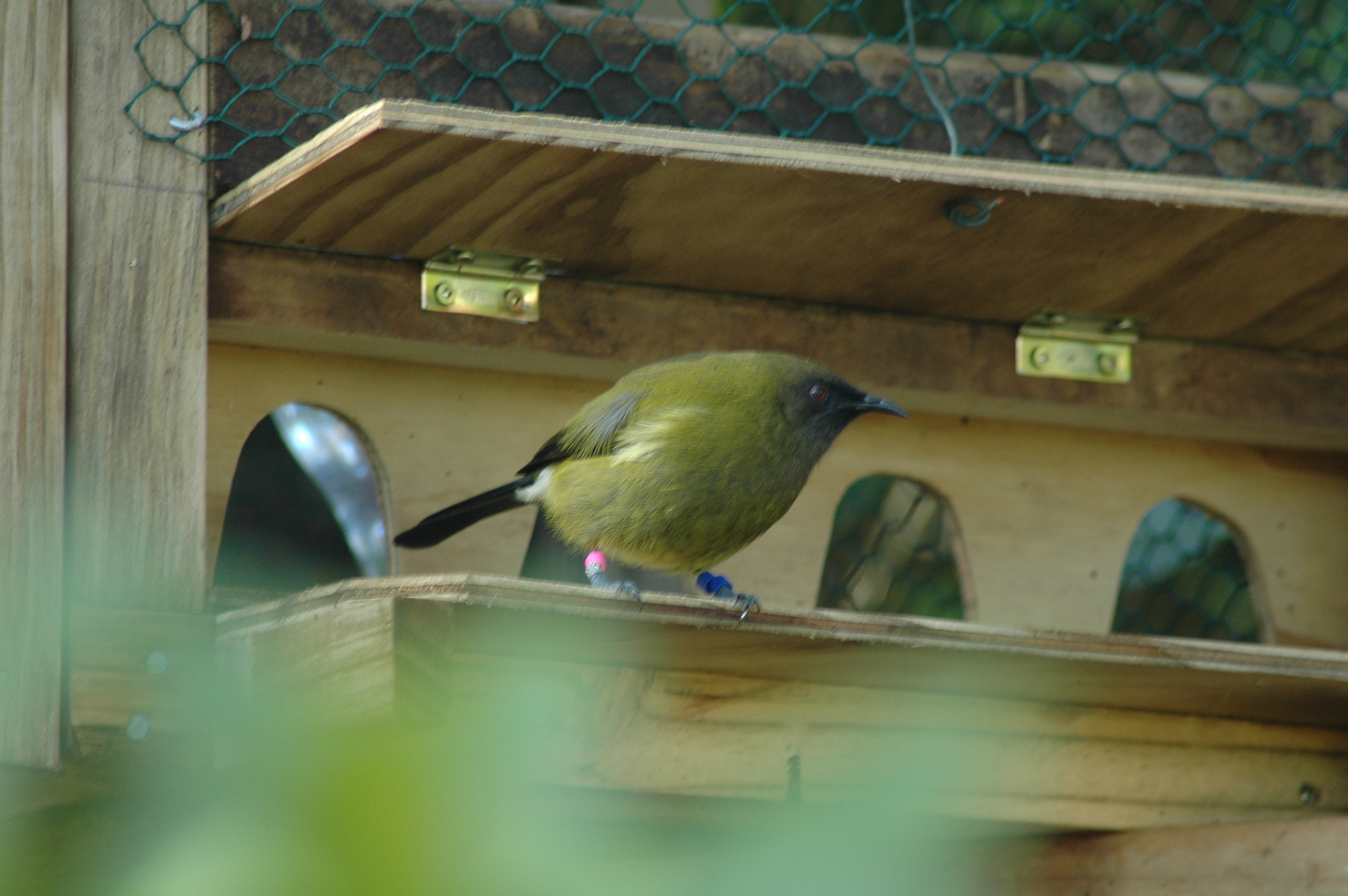 Mars NZ had 16 volunteers, via two water taxis, on a day of planting, weeding and beach cleaning.  We're getting used to beach landings and there's usually a moment as someone thinks they can make it in gum boots.....The team planted 35 Puriri, 40 Tawapou, 40 Karaka, 40 Mahoe, 50 Manuka and 25 Taraire in a 'thin' area just on the right as the ridge track splits to the left for the southern end.  There was weeding in both the nursery and adjacent to the ridge track.  The BBQ got a good work out and Mars were kind enough to leave a box of M&M bars and another box of Bounties (and a surplus bag of sausages for the freezer).  Half an hour of beach clean was the final act after a wander around the north end for a heritage lesson.  Another good day, with good people.  Wharf or not, the project progresses!
Simon Sheen

10 regulars set out on a drizzly morning from Okahu Bay but the weather soon improved to warm and sunny. The Tieke track spraying was completed, nursery maintenance carried out, kakabeaks repotted and manuka and cabbage seed sown. In the woolshed storage containers were filled and labelled and the kiosk filing cabinet sorted. The camera team went out and found that in 5 of the 10 nesting boxes for the fluttering shearwaters, birds were sitting on eggs. We have not had a bird hatch, despite all the effort, so this news is very exciting. To finish off a good day, after leaving Wharf Bay via the block, a pod of bottle nosed dolphins put on a great exhibition. 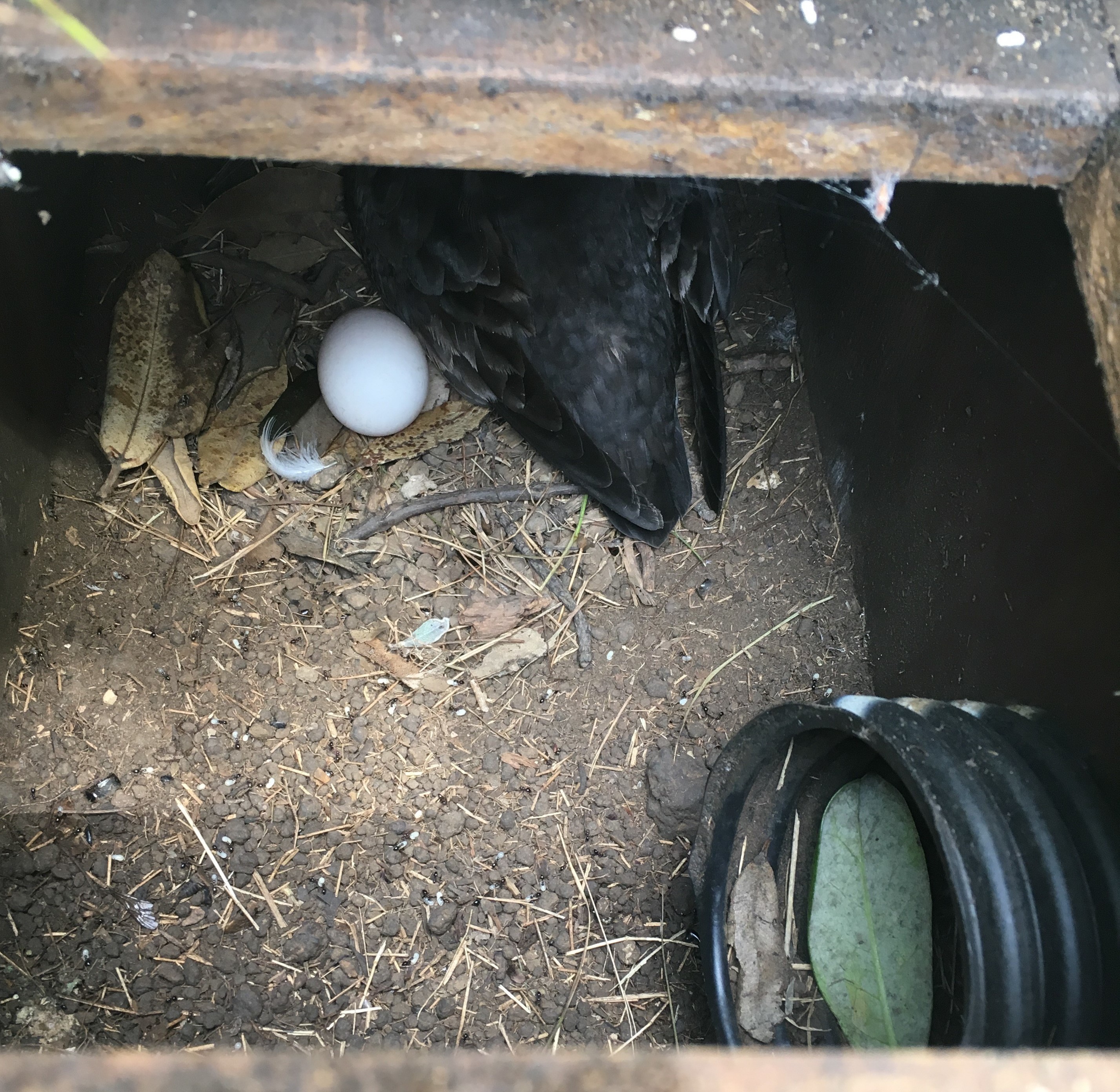 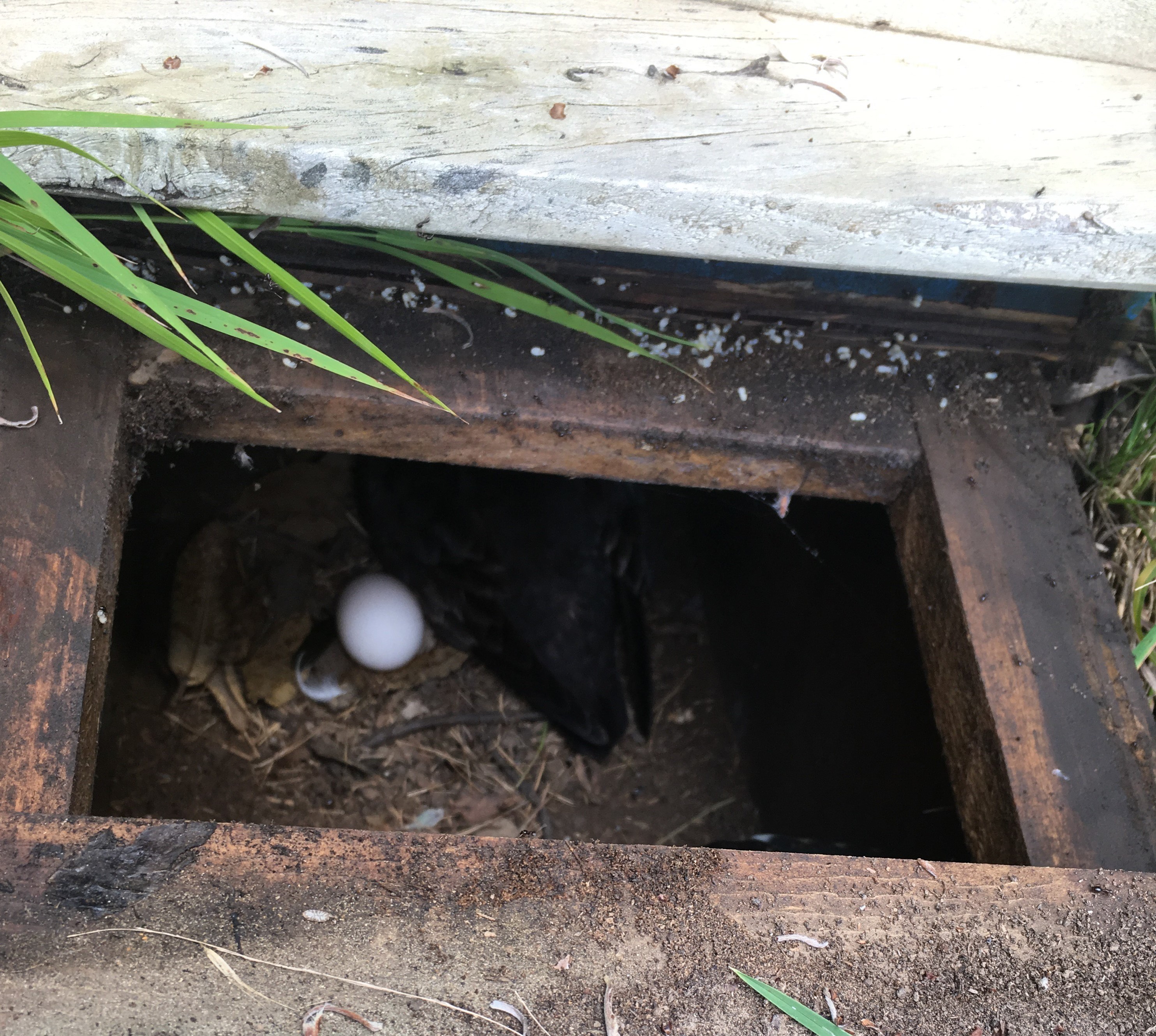