Motuihe's basement is hard old greywacke formed in the Jurassic era about 200 million years ago.  Overlying this are sedimentary rocks formed 15-20 million years ago in the Miocene era.  Mostly they consist of sandstones and mudstones formed from weathered particles washed off the land.  At the base of these deposits there is much coarser debris made up of cobbles, pebbles and grit.  Often it has fossilised fragments of clams, oysters, lampshells, barnacles and sea urchins, showing that this mixed debris deposited in shallow water was mainly the product of shoreline erosion.  The original layered deposits of sand and mud became rock by the processes of compression and by cementation, with fragments of chalk (mostly from crushed animal shells) becoming mixed with the deposits.  Along the south-west shore of the island the shell deposits are so concentrated that they have formed granular limestone.

Some parts of Motuihe have deposits known as Parnell grit.  This consists of volcanic debris from the Waitakere volcano that ran down underwater slopes as a lahar and settled out in isolated sites of the ancient sunken Waitemata basin.  The Parnell grit on Motuihe consists of pebbles and boulders of hard andesite rock (solidified lava) in a concreted agglomerate of coarse sand and grit.

Motuihe soils are known as Brookby loam and clay and Marua clay loam. 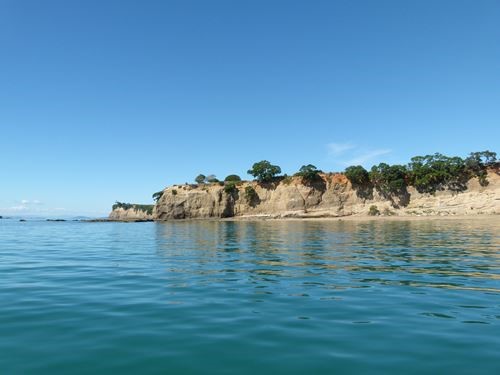