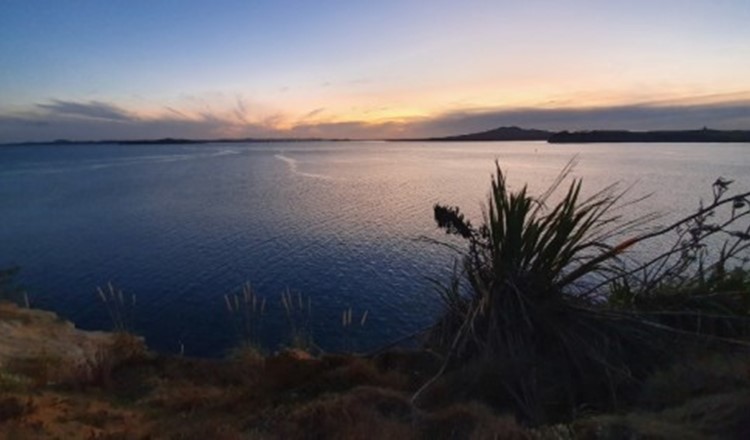 The next volunteer days are:
Due to the Covid 19 emergency, there are no volunteer trips planned for Motuihe. 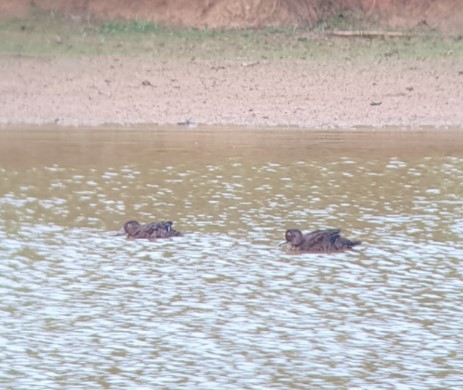 Brown Teal Ducks/Pateke on the pond 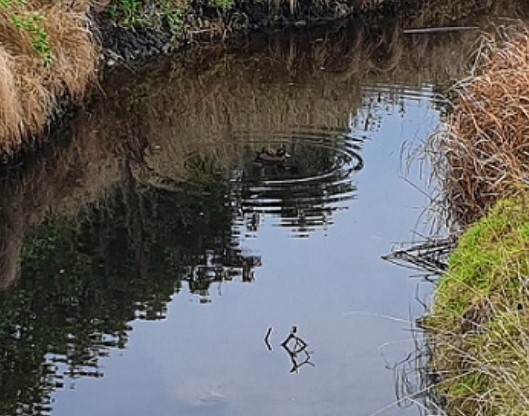 Over the past years on Motuihe our attention has been on planting low land coastal broadleaf forest and the eradication of invasive exotics such as moth plant and woolly nightshade. In the meantime, in small pockets, other species have been quietly establishing and adding to the bio-diversity.
Such is the case with the sand dune plants down on Ohinerau Beach. Spinifex (S. sericeus) or Kowhangatara and Pingao (Facinia spiralis).
Spinafex is blue-green in colour and in the autumn has a distinctive seed head that is best described as tumbleweed.  These heads become saturated and drop the seeds held within. It is their extensive underground roots (rhizomes) that bind the sand. The tall grass like tops are home to dotterels and oyster catchers.
Pingao is an endangered sedge. ----Sedges have edges, Rushes are round, Grasses have node from the top to the ground. Again it has extensive rhizomes but they tend to creep close to the surface and are particularly efficient in storing water. The plants tend to occupy the front face of a dune. The  brown-yellow leaves are used in tukutuku panels in meeting houses.
Both species are important and are worth considering for planting on the bank beyond the kiosk facing towards Waiheke.
In the nursery there are trays of these seeds sitting in sand. They may well look bare but please do not throw them out.  You may also notice another species labelled, Facinia nodosa. Related to the Pingao it is worth planting out if only for its common name The Knobby Club Rush.
Phil Francis 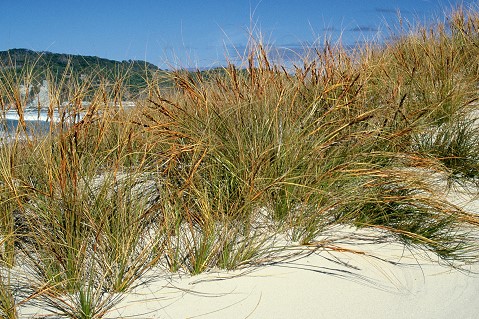 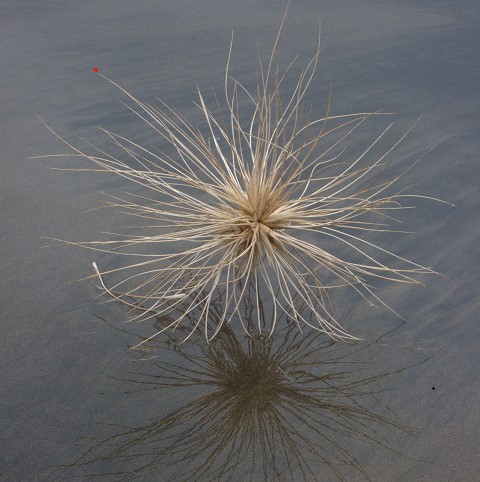 Disposal of the Navy buildings

I have been told a number of times that the Navy bulldozed the buildings over the cliff. If you read the following, you will see that this is not the case. Some of the demolished buildings may well have been pushed over the cliff by the Ministry of works but not the Navy. However, the Navy did strip the buildings of useful fittings.
There was considerable public debate, even before the Navy left Motuihe, about what to do with the buildings. This is an extract from the New Zealand Herald 22 December 1962
The opportunity to use and develop the whole island presents a challenge to the enterprise and imagination of the city. The City Council should be warned from past experience against letting the remnants of the naval establishment be diverted to any purpose which would deny any part of the island to public enjoyment.
In 1964 the Director of Parks commissioned a report on the state of the buildings left on Motuihe after the withdrawal of the Navy. Mr Simmonds found the following:
70 separate buildings, 50 of which were of large proportions. Eg 12 dormitory blocks 90’ by 23’ Gymnasium 115’ by 40’ and hospital building 80’ by 80’.
The buildings were either to be demolished, sold for removal or resited for further use in order to restore the land to its pristine condition. The buildings are of wood frame construction with corrugated iron and fibrolite roofing and have been reasonably maintained. The older buildings, 50 to 40 years which were part of the quarantine station, are at the end of their economic life.
After the Navy vacated the area the Ministry of Works took over and they have systematically removed electrical fittings, including ranges, all worthwhile sanitary fittings including baths, basins and pans.
Estimated cost of clearing the land = 30,000 pounds. This should be spread over a period of 3 years.
It has been suggested that the area be taken over by the Health Department or some private organization for health camp purposes or for the development of a public holiday camp or amusement park or for a guest house. These ideas have limited appeal as they would deprive the general public of their intrinsic right to take advantage of the land and beach frontages.
Conclusion: In view of the high cost entailed in order to add 31 acres to the existing Domain, and when balanced against a probable land value of 3,000 pounds, and the limited annual return expected the Crown is by no means over-generous in offering this land to Council, encumbered as it is with buildings which have in themselves little value because of their incomplete utility. It could be suggested that the Crown be asked to make some contribution towards the clearing of the area say 7,000 to 10,000 pounds.
New Zealand Herald 27 September 1964
The Government has offered the Auckland City Council a grant of 2,500 pounds toward the cost of demolishing or removing buildings on Motuihe Island. The 30 acres of land and the buildings were offered to the council last year after the Navy left the island. When members of the council parks and library committee inspected the former base they discovered that the Navy had stripped the buildings of all worthwhile fittings.
Auckland Star 18 May 1965
Two buildings on Motuihe Island have been offered to the Justice Department. The buildings would be taken by barge in sections to Rotoroa Island for the sanatorium of alcoholics. The Council will recommend that the remaining buildings be demolished.
Navy leaves Motuihe
The Navy finally left Motuihe in October 1963 and HMNZS Tamaki was re established at Fort Cautley on Auckland’s North Shore. There has been various interpretations of what state the Navy left the buildings in.
The following is an extract from a letter written by Richard T Hale Commander RNZN to the Mayor of Auckland.
Your Worship, In confirmation of our discussion the following facts are forwarded for your information:
August 1961 A Government directive was given to the effect that only essential maintenance was to be undertaken at HMNZS Tamaki, Motuihe Island.
19 August 1963 Naval withdrawal from Motuihe Island commenced.
9th September 1963 All essential gear and equipment removed for the commencement of the spring term at Fort Cautley.
8 October 1963 Withdrawal completed. Ministry of Works caretaker installed. Water reticulation system handed over to the Auckland City Council as a going concern.
On Navy vacating Motuihe all serviceable equipment including stainless steel urinals, benches, ablution facilities and fluorescent lighting for which there was a known requirement was removed and has subsequently been used in making HMNZS Tamaki at Fort Cautley a going concern. All external doors were left in a fully lockable condition with matched keys transferred to the Ministry of Works caretaker. Yale locks were removed from internal doors for subsequent usage. The fixed installations, oil fired boiler, cool room and diesel generators were not required and were left intact.
To safeguard this property the Ministry of Works caretaker was installed and is still in residence on the Island. At the time of evacuation there were no known broken windows or doors.
Hundreds of persons must have visited Motuihe in the summer months and it appears evident that vandalism by some irresponsible element may have taken place.
Fiona Alexander 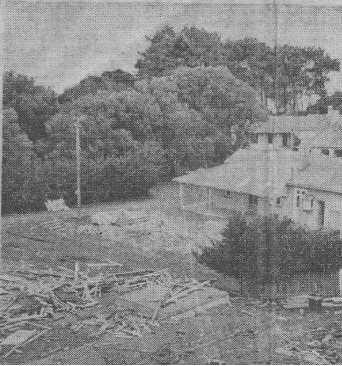 Fiona Alexander and Peter Barron have been upgrading the Navy and Coastal Defenses pages on the Trust website. It isn't quite finished as we are waiting for the Auckland Museum and National Library to reopen to check on a few details but it is almost done. There are far more pictures, there are links to stories by two trainees and an interview Peter did with Eileen Slark the wife of the last naval surgeon Tony Slark. Also there is much more information about the guns that were on Motuihe. Have a look.

TRIP REPORTS
There have been no volunteer trips to Motuihe during April due to the level 4 restrictions for Covid-19.

Volunteering Information
To volunteer for a Sunday trip you need to do two things. Firstly register with the Trust by emailing Fiona at info@motuihe.org.nz. Secondly phone Fullers on 3679111 to reserve a planter's seat. On the day go to pier one before 9 am and collect a volunteer card from one of our Motuihe people near the pier one ticket office. Take this volunteer card and your seat reservation number to the ticket office to buy a discounted planter's ticket for $24.50 and $12.60 for a child.