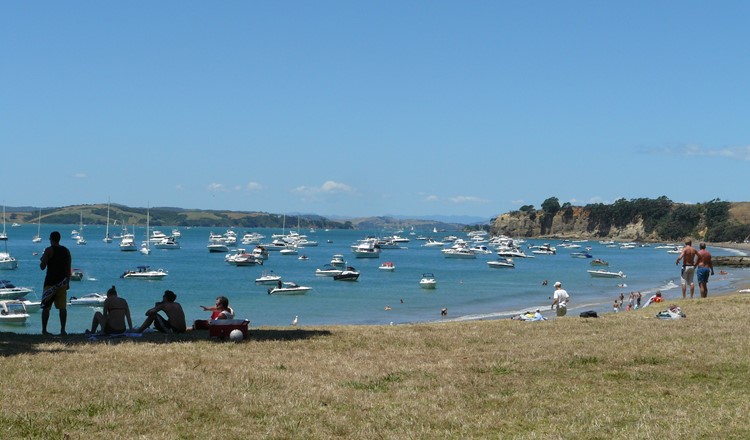 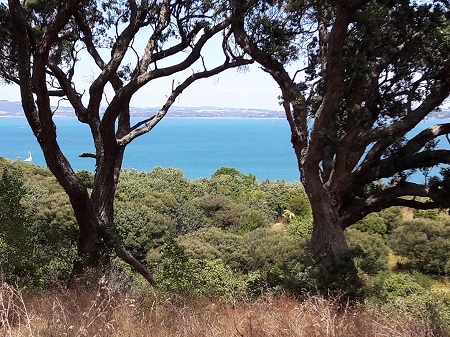 Lois took this lovely photo to remind us of what all the hard work is for.

Moth Plant
Over the last few months we have had a focus on getting on top of the weeds, particularly moth plant and woolly nightshade. Apparently moth plant does not only smother other plants but it also kills butterflies and moths. Their legs stick to the sap on the moth plant and they die. That is why it is called moth plant and some people call it cruel plant. 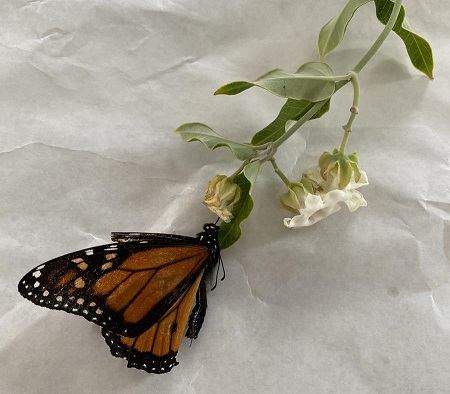 Von Luckner's Sextant
This precision instrument was made by Walter von Zatorski while interned on Motuihe Island during WWI. It is held at Te Papa in Wellington and I placed a request with the Auckland Museum for it to be transferred to Auckland where there is a collection of von Luckner artifacts. It was confiscated from the escapees after they used it to successfully navigate to the Kermadecs. The NZ Naval officers who removed it from the prisoners were so impressed by the fine workmanship that the Head of Navy gifted it to the Dominion Museum in 1918 and that it how it ended up at Te papa. I had a lovely reply from the curator and she said they would not be applying to have the sextant moved to Auckland "To ensure the story gets wide ‘coverage’ we prefer to spread items through several repositories". So if you want to see it, you will have to go to Wellington.
von Zatorski was one of 14 officer cadets captured in Samoa in 1914. He would have been very familiar with a sextant. Six of the cadets were on the Moa when it was captured at the Kermdecs, including von Zatorski.
available online here Video from Te Papa. 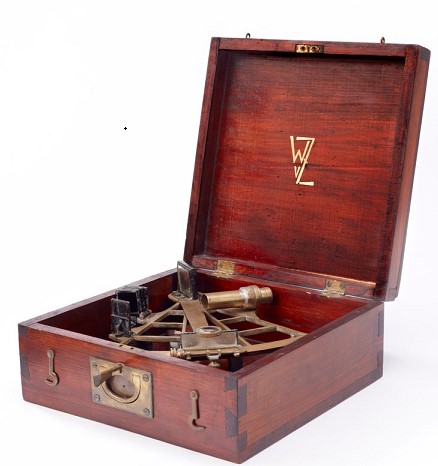 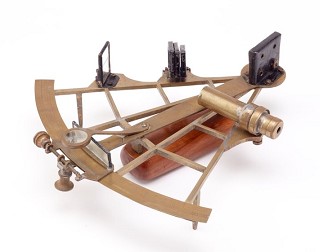 Both photos are from Te Papa's collection on their website.

The glamorous life of a DoC Ranger!
Last weekend (20/21 Feb) was busy because of the sheer number of people on the island. All bays were full with boats waiting for the Prada cup to start. The camp ground was very busy and almost full. Our max capacity is 48 camp sites. In addition to having to clean toilets almost every hour I had a DoC dog handler on the island who needed to be transported backwards and forwards checking for Argentine ants and rodents. On Sunday 2 o’clock it finally happened and the toilet drains couldn’t cope any more and blocked. While trying to stop the sewerage tsunami in the confined space between the male and female toilets I could still hear the toilet flushes on both sides going off relentlessly. To make matters worse call outs started coming in for me to deal with dogs on the beaches. Covered in excrement and toilet paper I had to race off leaving a fine mist of sewerage in my wake. I had one report of two dogs on the southern end of Ocean Beach. As I got there no sign of dogs, but encountered an elderly couple with their pet dog just disembarking from their dinghy. There were not too impressed being told to remove their dog by a person with apparent poor personal hygiene. After dealing with more dogs on Ocean Beach I had to face people screaming with pain from being stung by jelly fish on Wharf Bay. I refused first aid because of a vision of a headline “Motuihe Ranger source of outbreak of Ebola, Cholera and Plague”. The kiosk volunteers kindly attended to them.
Other entertainment included tents being pitched on Bald Knob, overnighters in tents above Ocean Beach, a dead rabbit washed ashore on Ohinerau, Sea Legs craft leisurely driving the length of beaches, children setting of traps with sticks. I was wondering whether it could get much worse. T-rex predating kiwi, asteroids hitting the island and a Rottweiler convention being secretly held at night on Calypso Bay? Yes, it did get worse, arriving home, there was no cold beer in the fridge!
Rudi Schmidt (Motuihe weekend ranger)

TRIP REPORTS
14 February Weeding Leadership Training
Valentine’s Day with a difference!
A group of thirteen potential new weeding team leaders spent Valentine’s Day on Motuihe as part of an induction programme designed to (1) increase our cohort of weeding team leaders for mid-week and weekend volunteer trips, (2) improve the efficiency and effectiveness of volunteer weeding efforts and (3)ensure the ongoing safety and well being of our casual volunteers.
Attendees had responded to a call for new weeding team leaders, so we took them to Motuihe for an induction programme that covered a number of aspects, including:
The group proved to be enthusiastic and committed – so much so that they had to be dragged away from attacking weeds in order to catch our return water taxi. A number of useful ideas to improve our weeding efforts were discussed and these will be implemented over the coming weeks. We hope many of these participants will become leaders for future trips. Our thanks go to all involved.
Mike Sumner and Lois Badham 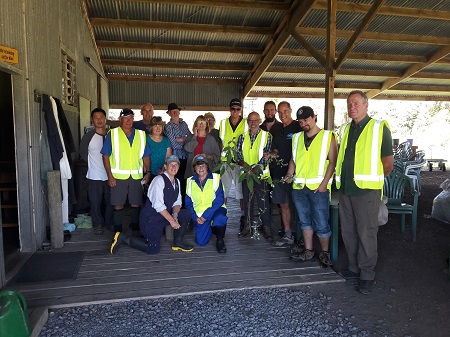 Mid Week Volunteers Trip 25 February
Sweltering hot day started well with 58 volunteers more or less on time for the Dreamweaver however, after a few minutes it was clear (through the fog of fumes) that 'we had a problem'.  with most internal combustion engines fuel is required so when we ran out it meant a return to Westhaven.  Take 2 and no problem getting out and tendering in.  Robin the Ranger helped us get gear up to the nursery.  Liz looked after 10 or so weeding and sorting in the nursery.  Jill, Jeanette, Graham and Simon set off with the rest of the volunteers for Steph and Bella guided weeding.  We ended up on the approach to Calypso dealing to hundreds of woolies.  A highlight was being joined by a Ruru who silently swooped around us.
The volunteers from ASB, KPMG and Westpac had a wonderful, productive and very hot day.  A last swim was obligatory.
Simon Sheen 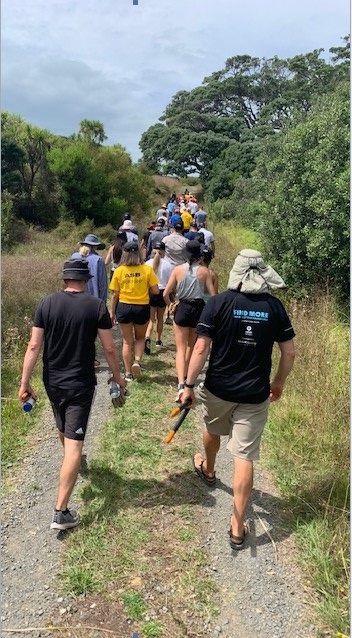 Volunteers stride out to do battle with woolly nightshade. photo by Foster Barry from kpmg

Saturday 27 Feb Water Taxi
A rare Saturday water taxi trip saw some keen regulars join up with Auckland Tramping  Club  to attack woolly . The trampers were camping on Motuihe. Steph had a special  area lined up for us beyond Bald Knob. En route to the site we were able to take the trampers ( David, our stranded English regular volunteer, called them ramblers) through Tieke Track and share stories and points of interest with them. The area chosen by Steph was worse than Simon's dreaded paper clip. There was no need for loppers. Saws were the weapon of choice.  It was a hard day at the office for everyone  but the impact was amazing. Was great to look back and see all the felled woollies. We were very grateful to have the help of such an enthusiastic group. Thanks Auckland Tramping Club.
Jill Bishop 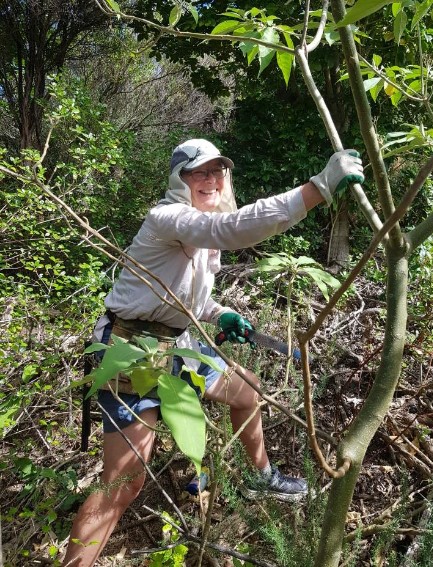 Alison Jepson, one of the Auckland Tramping Club volunteers, hard at work cutting down a forest of woolly nightshade. photo provided by Jill Bishop