During May there was one volunteer trip to Motuihe using a water taxi. Nine of our regular leaders used the trip to prepare for the winter planting season.

The next volunteer days are:

Saturday 27 June
Sunday 12 July
Sunday 26 July
Currently there is no potting mix on the island so work in the nursery is limited. Also our planting season is on hold at the moment while DoC carries out an archaeological audit. So weeding and maybe seed collection are the main tasks until these two issues are resolved. It is a very fluid situation so activities will change weekly. We are using water taxis so you have to be agile enough to wade out to a boat and climb a ladder. Despite all these obstacles, if you would like to join a volunteer team, please email Fiona at info@motuihe.org.nz.

The Motuihe Trust had its first meeting on the porch of the previous kiosk on 30 June 2000 and was officially registered on 1st September 2000. The amazing success of this restoration project is due to the hundreds of volunteers who have contributed their labour and time. We think this anniversary  is worth celebrating and also an opportunity to raise the public's awareness of this jewel in the Hauraki Gulf sitting on their doorstep. There have been a number of ideas proposed including a catered dinner evening at the Outboard Boating Club, displays set up to promote the island during Conservation Week 5-13 September  in a downtown location or perhaps the Zoo. We would like to know what our friends think. If you have a suggestion about how we should recognize this milestone, please email Fiona at info@motuihe.org.nz. 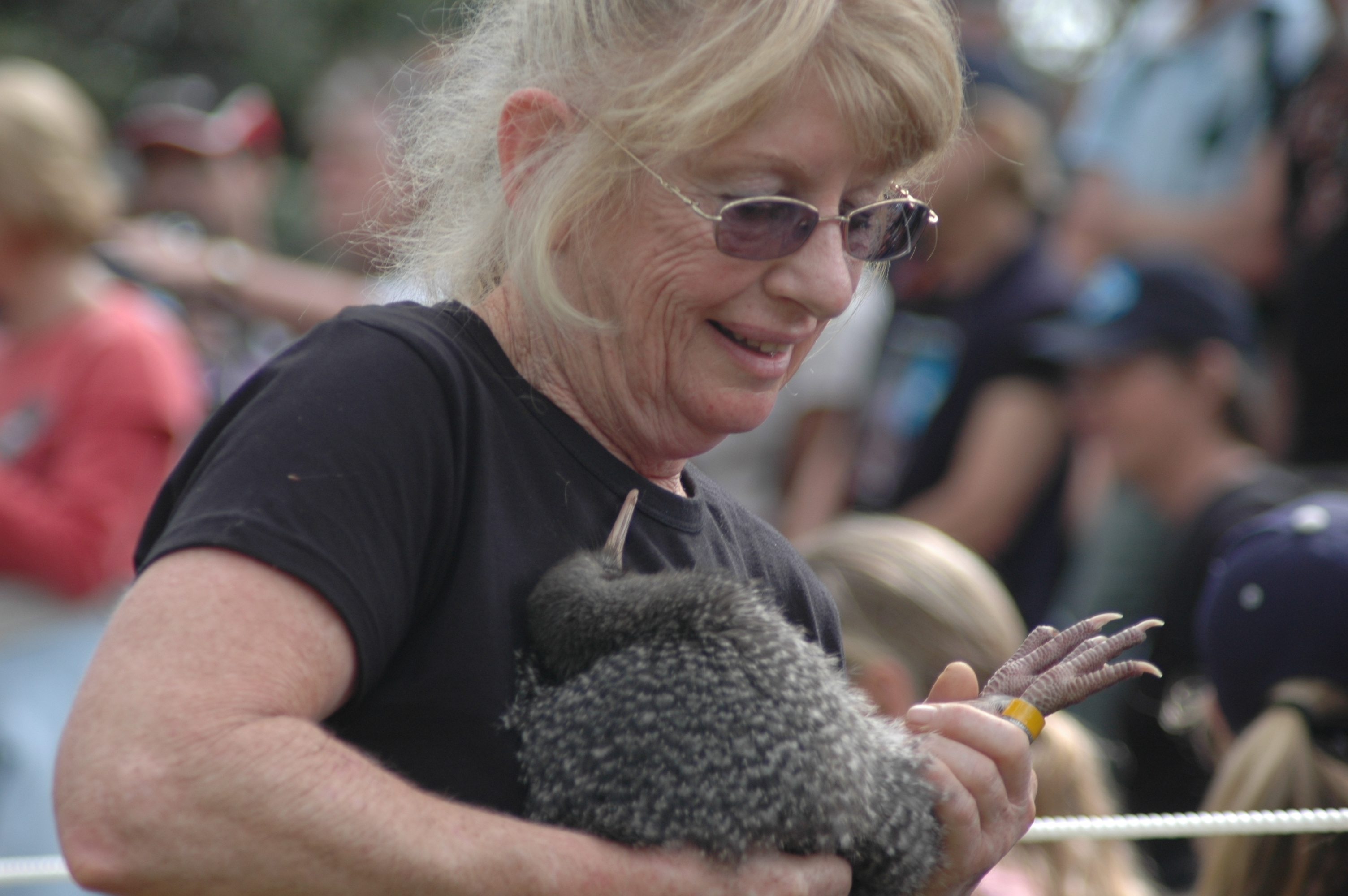 Extract from Roni Harrison's memories of running the farm on Motuihe
Managing the stock
Dogs were not allowed to land on Motuihe so we managed our stock movement by persuading them that the sound “Coomm oonn” meant an open gate to fresh new grass. We barged and trucked weaners onto Motuihe as they were light and wouldn’t pug the ground as much as heavier cattle. They were young and learned good habits quickly making it possible to move them with minimal effort. As Honorary Warranted Officer for DoC, Terry was still able to attempt to keep dogs off the island, among his other unpaid duties  His appointment was rolled over for another three years on 12th Dec 2001.

Sheep were also trucked on as a grazing tool. We farmed Romney Finnish Landrace sheep having good feet for the winter months of wet clay muddy terrain and threw mostly twins and often triplet lambs. These followed the cattle in an ideal situation keeping the farm looking tidy. Unfortunately by the time we started, the fencing needed attention with sheep regularly getting into areas we didn’t want them. Sheep needed shearing and we went north to purchase the extras required at the Motuihe shearing shed. We found a man called Tony who came over and sheared with Terry, usually staying 3 nights happily shearing, fishing and enjoying the Kiosk hospitality and we the company. Sheep need a lot of help, foot bath, flystrike, dagging, crutching, facial eczema etc

Grazing, prior to mowing the headland before camping season started, was an ongoing event. Cattle were enthusiastic, walking sedately along the road until going through the open gate from the house paddock. There, encouraged by the promise of new pastures their gait suddenly changed as they kicked their back legs up and galloped off down the hill. This had to be undertaken when there was little likelihood of casual boating visitors as they were growing and fast. The beach and foreshore were an interesting diversion and some would always head off to investigate.  It could take some time and effort, involved much shouting, but Mike, Terry and I managed to get them up the road and safely shut into whichever paddock they had to start on.

The next task was shifting them back up again to the farm area and after a couple of days to dry the cow pats (I collected as much as I could for my gardens and nursery) mowing the area commenced. 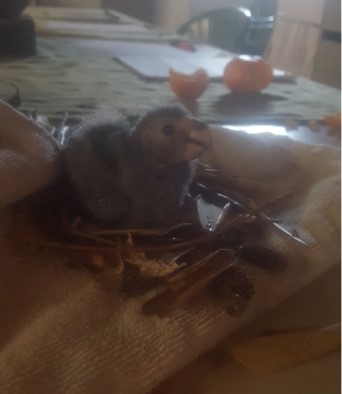 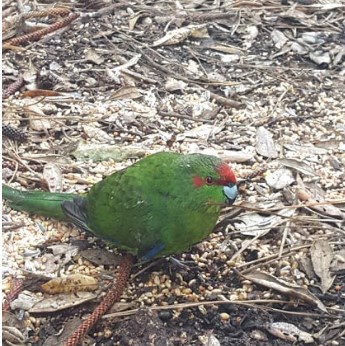 Kaha above and a kakariki on Motuihe

Heritage continues to be upgraded on our website. check out the new von Luckner page
motuihe.org.nz/about-the-island/heritage/1917-count-felix-von-luckner/
Butterflies on Motuihe
Ever had that issue with the teenagers eating you out of house and home? An issue solved only after you have bought them a house three doors down from KFC. Well monarch butterflies are much the same when they lay their eggs on swan plants with their toxic sap rather than the nectar producing flowers in the garden. Why have those caterpillars devastated the very plants that supply you with sweet nectar?
Motuihe Island has similar activity.
During the summer, as you have walked up to the wool shed, have you ever noticed small orange butterflies hovering about the muehlenbeckia? Muehlenbeckia astonia or Wirebrush is that small leaved plant scrambling up and over the taller native plants.
New Zealand does not have many butterflies. We have moths. However the colours of those few butterflies we do have compensate with their vibrant colours. It is the Coastal Copper butterfly (Lycaena salustius ) that you will see laying its eggs on the muehlenbeckia.
Note: Just as New Zealand has few butterflies many New Zealand plants do not have much need to produce flamboyant flowers to attract butterflies. Moths are the more active pollinators and many trees have insignificant flower displays.
However there are exceptions and on Motuihe it is the Koromiko (Hebe stricta) with its large white flower spikes. It can be found at the junction with Tieke Track and around the wool shed. Over the years we have also planted koromiko across the island. It is on koromiko that the butterflies will be finding nectar. 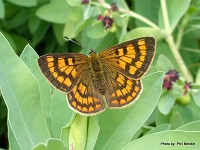 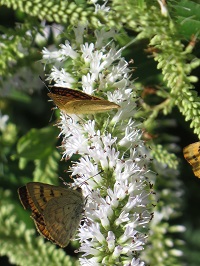 A big thank you to all the Kiosk volunteers who volunteered their time over the summer – the Kiosk opened on Boxing Day and was open for 42 days up unto Sun 8 March versus 52 last year (unfortunately cut short by Covid-19). In addition to the regular core, It was great to see some new people joining the team.
Sam Gambling from DOC provided much appreciated support co-ordinating transport for Kiosk volunteers to and from the Island – with the wharf closed we lost the daily Red Boat service that Kiosk volunteers were able to utilise the previous summer - this meant daily Kiosk volunteers were not able to participate.
With no permanent DOC ranger on the Island over the summer it was great to have Josh Clarke and Stephanie Loughnan resident on the Island working as Summer Contractors for Motuihe Trust and Liki and Rudi who were on the island regularly as volunteer Ranger cover – they provided great support to Kiosk Volunteers and were on hand to man the Kiosk on occasions when volunteers were not available.
Early in the summer the prevailing south west winds impacted visitor numbers to the Island – winds > 15 knots often on weekends kept the smaller family boats away. With the arrival of Covid-19 the island was closed down – unfortunately this coincided with beautiful late summer early autumn conditions which we and the fauna on the Island have been able to enjoy in isolation. The record visitor and sales day was Sunday 12 Jan anchored by Jill Bishop and her 3G experienced team.
For reasons outlined above and based on a correlation to sales I estimate that up until Sun 8 March we had approx. 3,800 visitors into the kiosk versus 5,400 for the same period last year. Kiosk volunteers cover a range of tasks – providing information about the Island to visitors, assisting campers, and  keeping an eye on things – birds nesting on the beaches – dog incursions – one day Liki’s first customer arrived at the kiosk with her large golden Lab in tow!
As word spreads about what Motuihe has to offer – Bush Walks, Beaches, Camping and extensive range of native birds and Tuatara on show many more people are enjoying exploring the Island especially the Tieke Track.
All systems worked well in the kiosk – solar powered freezer and eftpos machine - the kiosk received a well overdue spruce up prior to Christmas and Lois coordinated a revamped presentation of information in the kiosk inclusive new material which attracted the interest of many visitors.
Hopefully prior to next summer some of the challenges we faced this year with the wharf and volunteer house closures will be resolved and in 6 months’ time we will once again be looking for volunteers for summer 2020/2021
Thank you for volunteering for kiosk duty over this last summer your input is greatly appreciated by the Trust and visitors to the Island - the friendly reception that visitors experience when they visit the kiosk makes for a great day out.
Stuart Macintosh

After a long gap with no volunteers on the island, a group of 9 leaders spent a day preparing for the winter planting season. Lois, Jill and Phil worked in the nursery, Brian and Wes built shelving to accommodate storage boxes, Julie and Jackie replaced batteries and cards in cameras, Simon did a survey of weeds and I set up my new bush camera and sorted out the woolshed etc. Phil reported that the nursery was in better shape than he anticipated but there are many plants that urgently need planting out.
Fiona Alexander