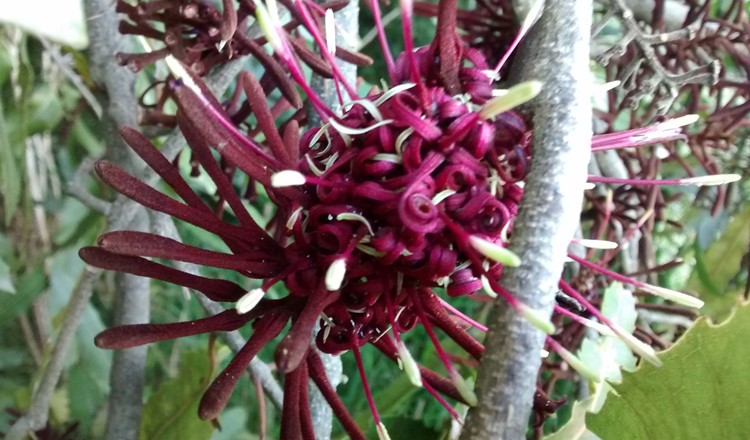 During May: We had 3 volunteer trips to the island and 1 trip cancelled due to weather. A total of 88 adult volunteers helped in the planting project with 27 Trust leader trips involved. 698 trees were planted and 438 of those qualify for the Trees that Count programme.

We are in need of volunteers to plant the 2 seasons of trees in the nursery waiting to be planted. If you cannot do this physical work yourself, please spread the word that we need people to plant on Motuihe. All the information anyone needs is just an email away: info@motuihe.org.nz.
As part of the effort to recruit volunteers, Hazel and Lois spent a fun morning at the AUT Volunteer Expo.
Lots of young (and not so young people) wanting to know more about Motuihe Island and what volunteers do there.   25 people signed up to get more information.  Note for next time - take a big map of the Waitemata harbour to show where the island is and how close to the city.
Hazel Hodgkin 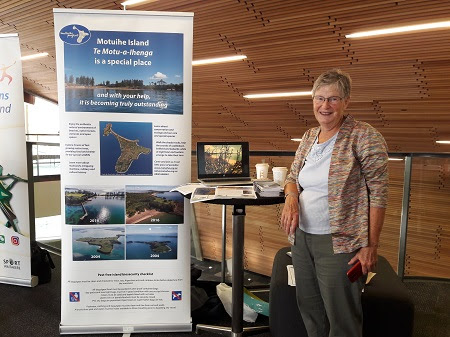 Hazel at the AUT Volunteer Expo Photo: Lois Badham
Standing Water on Motuihe continued
Last month I reported on the standing water held in ponds at the highest point in von Luckner's creek. Since then I have been to the bottom of the creek where it comes out on to Ohinerau Beach The bottom pool holds quite a bit of fresh water and despite the dry weather, water is trickling down into it. Where the creek comes out on to the beach, there is no flowing water but there is a big, wet bog (I know because I walked in to it!)
Fiona Alexander 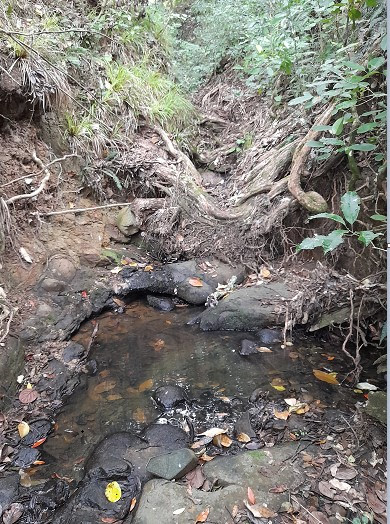 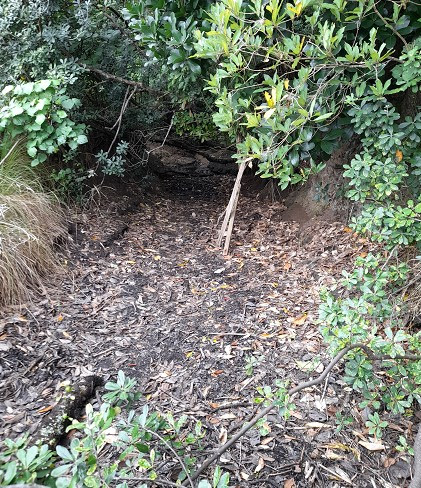 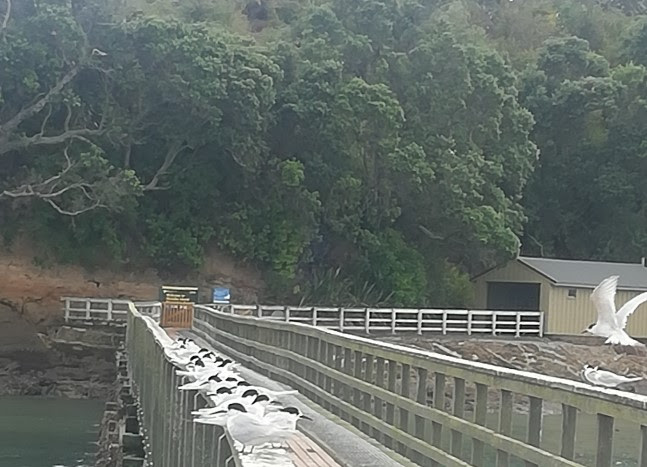 The terns have been waiting on the wharf for our return. Photo: Vicky King.

TRIP REPORTS
Wednesday 5 May Dreamweaver trip
What a great example of how a volunteer day is such a positive experience for so many people.  This was the Trust, the community and commerce enjoying a great day.  Forty employees, suppliers and customers of Inzide (sustainable commercial flooring) joined 7 Trust leaders planting 410 trees, weeding and cleaning up Wharf beach.  The weather and catering (of which more later) played their parts beautifully.  The first treat was the Dreamweaver gently taking us past the Leopard seal who was enjoying some vitamin D on a Westhaven marina pontoon.  Second was the Bellbird chorus coming from the shrubs outside the Volunteer Hut.  How good is it to hear that song?  The planting was in G7b. On the slope running down from the service track that goes out to the track above Ocean Beach. The excellent team managed to get 410 plants into the ground, 160 of which will qualify for the Trees that Count programme.  Phil and Jill led the planters with Graham, Colin, Dave, Callum and Simon leading weeding teams who found a number of moth pods and dealt to plenty of woolies.  This being the ‘Big day Out’ for Inzide they repaired to the Dreamweaver for lunch (during which time we kept hard at it) and then emerged for a half hour beach clean which illustrated, once again, the sheer volume of plastic that washes up on Ihenga.  This day is exactly the collaboration which makes such a success of the island project. Tapping into the seam of those keen to make a difference, allied to teamwork from the Trust, results in a productive, enjoyable day.  Inzide, and many like them, will be back.  Finally, the ‘magnificent 7’ (Colin, David, Graham Banks, Graeme Seymore, Edward, Callum, Mike and Diana) got stuck into the nosebag on the way home.  The catering bar has reached dizzy heights.
Simon Sheen and Phil Francis 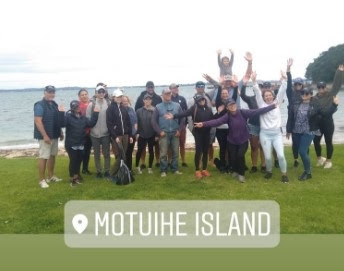 Sunday 9 May water taxi trip
The last Sunday volunteer’s water taxi trip was a great success despite the unexpected closure of Tamaki Drive AGAIN!  Showers were forecast  but luckily we avoided  any significant rain. The 14 volunteers split into work groups. Phil led 7 on a planting trip to Pug Paddock. A total of 120 trees were planted including coastal mahoe, sedge, kohekohe, cabbage (PB3 size), kahikatea and toi toi. Mike, David and Frances headed off to G6 and dealt with the rhamnus and woolly nightshade, Lois and Jackie 3/4 completed serious trimming back on the Tieke track from the start to just beyond the extension, Fantails, saddleback, whitehead and kakariki provided entertainment. .Fiona went to Ohinerau and re-sited the dotterel shelters and Chris went to the eastern side of the horse shoe planting area and scattered a variety of seeds. In the afternoon work was completed in the nursery with 60 poroporo bagged up to PB ¾ and 60 pseudopanax arboreus into PB3 and Frances did a beach clean up. The gel bottles were refilled. It was a happy, productive day. We gave Steve of Sea shuttles a big thank you  for his 21 Sunday trips that have kept the project moving forward over the wharf closure period.
A big thank you to all our volunteers, particularly to Phil for organizing the planting.
Fiona Alexander 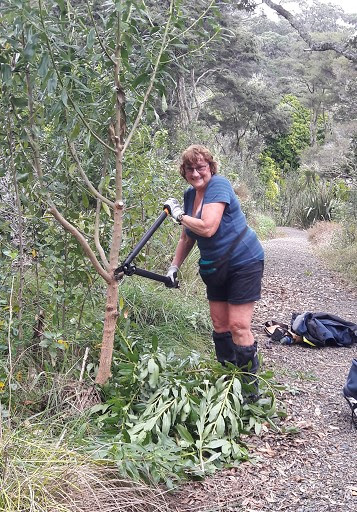 Friday 21 May Dreamweaver Trip
The 55 volunteers were, once again, treated to a 'glide past' the leopard seal who has taken up residence on the Westhaven pontoons. The Dreamweaver slid in on a glass sea; the 9 Chapman Trippers and 34 IANZers split into planting under Phil and weeding with Mike.  Perfect working conditions saw 168 mixed species planted in Pug Paddock, 158 of which will qualify for the Trees that Count programme.  The weeding brigade started near the trig and spread out to hit hot spots.  Once again plenty of juvenile and bigger woolies plus the added bonus of approx. 10 moth pods from now dead plants. IANZ fired up the BBQ and after a good feed, visitors enjoyed the island, did a beach clean on wharf bay and braved a paddle.  We were fortunate to be joined by Shelley Heiss-Dunlop who helped with original island ecology reports and is helping find rare plant seeds.  As ever a big 'thank you' to the leaders; Jill, Phil, Graham, Frances, Graeme, Oliver, Rebecca, Dave and welcome back Peter B!  Not to forget Kirsty and Paul from the Dreamweaver who continue to support the project having become an integral part of our 'family'.
Simon Sheen
Sunday 23 May Red Boats Ferry trip CANCELLED due to weather

To visit Motuihe and explore the beaches, bush and heritage, contact The Red Boats directly on:
https://www.theredboats.co.nz/cruises/motuihe-island-ferry

Volunteering Information
To volunteer for a Sunday trip you need to do two things. Firstly register with the Trust by emailing Fiona at info@motuihe.org.nz. Secondly, after receiving your email, Fiona will send you the information to book and pay for your ferry trip with The Red Boats. Please book and pay as early as possible as The Red Boats require 30 passengers for a trip to go ahead. The ferry leaves Z pier Westhaven Marina at 9 am and Motuihe wharf 4 pm.
The Red Boats Sunday ferries to Motuihe 2021 for planting volunteers or visitors.
Email Fiona on info@motuihe.org.nz
Mid Week Trips
To book email Simon Sheen on Volunteermotuihe@gmail.com
The Red Boats propose the following Friday dates. However, on request, and with at least 30 passengers, other days of the week could be organized.
The Red Boats proposed mid week trips to Motuihe for planting volunteers or visitors.