During May there were three volunteer trips to Motuihe involving 69 adult volunteers, 2 children and 26 Trust leaders.

Queen's Birthday Ferry
The Red Boats are running a ferry on the Saturday of Queen's Birthday 4 June. Book through the Red Boats
https://www.theredboats.co.nz/cruises/motuihe-island-ferry/?gclid=Cj0KCQjwhLKUBhDiARIsAMaTLnFJyiyvfyLezS5_JLSzE-GlNknGTRnnMxN2QZauz-V1kn1os4qACbkaAtuKEALw_wcB

Infrastructure upgrade
DoC has installed cleaning stations at the beginning and end of the Tieke track. Let's all use them and save the trees we have worked so hard to establish. 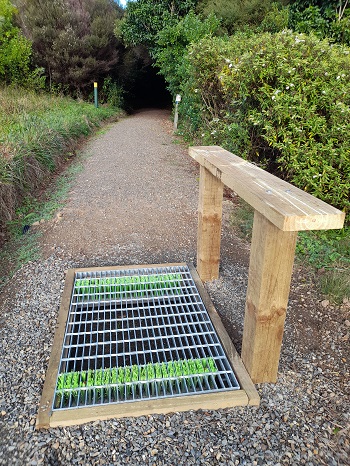 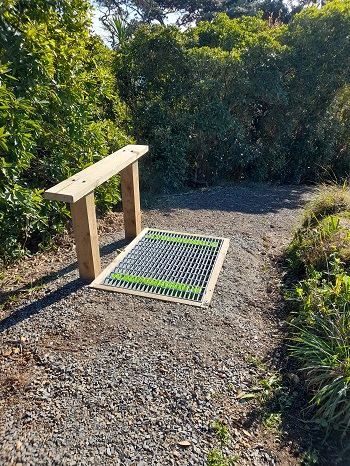 The concrete ramp in Wharf  Bay was broken and unusable. It is used to get vehicles on and off the island so it is an important asset for the island. The ramp has been replaced and the road above the ramp realigned and concreted. A very good job done. 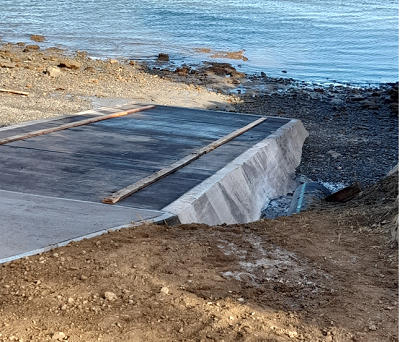 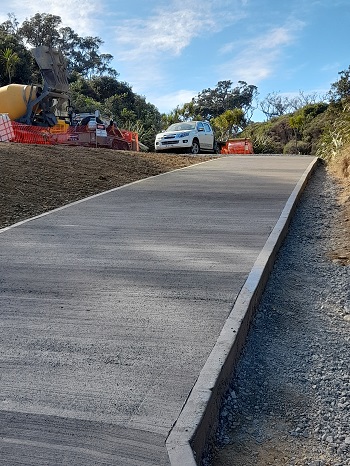 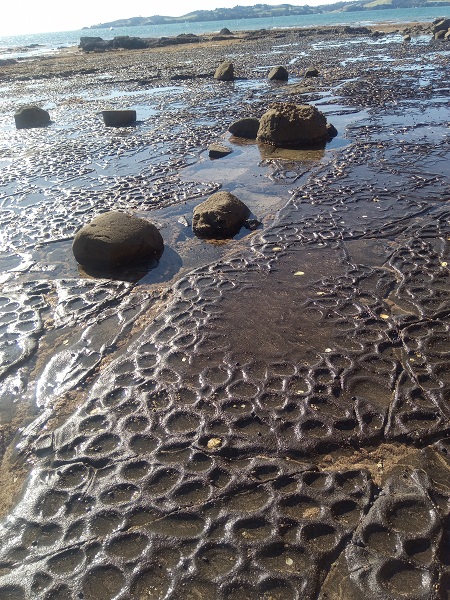 Ulrike sent in this lovely photo of the reef on Ocean Beach. We are always so busy on the island that most of us rarely get to explore this area of the island.

TRIP REPORTS
Friday 6 May Red Boat trip
Simply stunning day with over 60 volunteers ranging from regulars like Elizabeth and Phil to returning supporters ie Rebecca Simpson. Groups from Electric Kiwi, ASB, Salesforce and Westpac enjoyed a Redboat glide there and back.
A dozen or so helped Phil and JIll (see Phil's report) with the remainder weeding south of Taraire Bush with Colin, Simon, Frances, Peter B and Graeme. There was even time for a beach clean, sunbathe and swim in idyllic conditions.
Great visit with all returned safe, sound and satisfied with a good day's work.
Simon Sheen 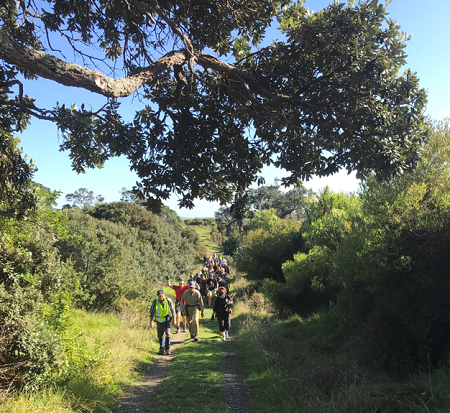 Weeders returning photo by Simon
An excellent day in the nursery on May 6th 2022. The nursery supervisors were Doris, Elizabeth, Liz, Phil and Jill.
Firstly Jill, Elizabeth and Doris planted out the remaining kaka beak pots, feritilized them and scattered snail bait. The team moved on to set up a further 100 kaka beak in PB3 bags. Reseeding when required. Although many of the seedlings planted in March had been eaten there is hope that things are now under control.
This team also pricked out 112 whau into PB 3 and moved them to the shade house.
Phil Francis

May 7 Kiwi Call Survey – a magical night on Motuihe
The beautiful summery day created a stunning start for Survey night 1 as we whizzed across the sparkling Waitemata in the Sea Shuttle. We had lost a couple of team members to covid isolation but 12 of us in the shuttle were soon joined by Rob, Norm, Al and Radika in their own boats. We had 10 experienced listeners so they did a great job of training up our 6 newbies for the night. During our afternoon familiarisation for newbies we also did some seed collection of canopy species that are needed in the nursery. We discovered how desperately dry the soil is even in the old forest areas. This season’s kohekohe seed and tawapou were available but we had to collect older puriri and taraire was almost unavailable.
It was great to have the new roller door open in the woolshed allowing good ventilation and lovely sun to pour in. We toasted Al and his brother, who fitted the new door and he promised to return soon to complete some finishing which will make it easier to use. Our 2 hours of listening for kiwi calls, 6.30-8.30pm, was blissfully still and mild but a bit disappointing for those at our most northern listening sites where the kiwis were unusually quiet. Sites 1 and 2 had zero calls, while Site 3 had just 1 call. Total calls for the night were 24, compared to 36 at this time last year. We believe that the kiwis are currently pre-occupied with finding moist areas and food. The kiwis on Tiritiri Matangi have apparently been similarly quiet in these drought conditions.
On our return to the woolshed, two of our team disturbed a 4-legged “creature” that scuttled under debris near the old cowshed. After failing to find anything, and concern that it may be a rat or small cat, we set up a few of our black trakka tunnels and baited cards around the cowshed. We hoped to get clearer evidence of any possible “pest incursion”. On Sunday there were no prints in the tunnels, our bait was not ideal, so we reported the sighting to DOC ranger, Patrick. DOC interviewed our kiwi team and Patrick has followed up with many more properly baited tunnels, visits to the area after dark and a dog team visit. So far, there have been no signs of a mammal pest in any of the tunnels and no evidence from the dog team. Patrick did uncover a rather large Duvaucel gecko near the cowshed which is a very pleasant surprise, being so far from the Duvaucel release site.
In spite of our eventful evening, the majority of our kiwi team got up between 4am and 5am and sat outside under the stars to watch the exciting astral event that occurred on Sunday morning. They saw the rare alignment of 4 planets,(Saturn, Mars, Venus and Jupiter) and the same patch of sky lit up by a meteor shower as earth passed through the dust and ice left by Haley’s Comet. We had a truly magical time on Te Motu-a-Ihenga. We are just wishing for some solid rain before listening night 2. 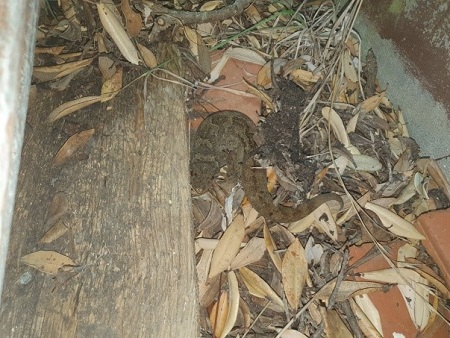 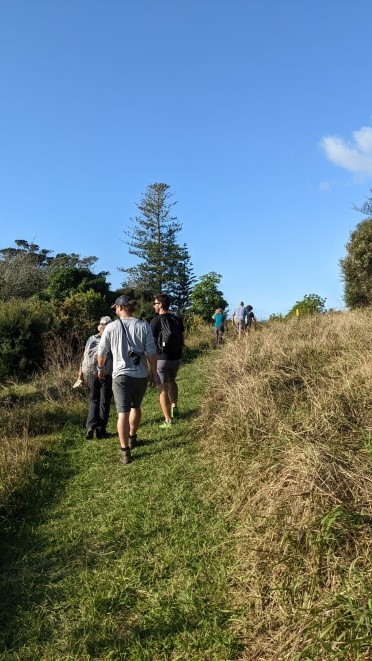 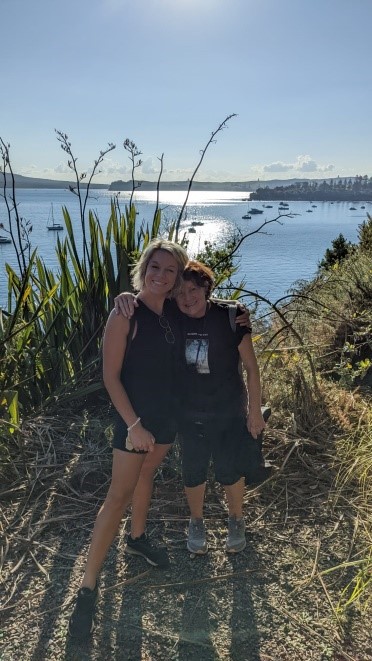 Sunday 15 May Red Boat Trip
We had 12 public volunteers plus 2 children on this trip and 7 Trust leaders plus Bruce Gulley the Health and Safety inspector. The forecast was for rain and strong winds but it turned out to be a fairly pleasant day. Lots of work was achieved, particularly in the nursery. Potting up = 3 five finger, 3 karaka, 150 kawakawa, 80 pingao and 29 ngaio. Julie and Jackie led a team out seed collecting and weeding. The seeds were sown in 9 trays: 1 puriri, 1 kanuka, 2 tawapou, 2 karaka, 2 kohekohe and 1 whau. John and Stuart escorted Bruce Gulley around on his inspection and Brian continued building the plastic house. Fiona and Emma attempted a job at the pond which did not turn out well but we learned some important lessons. A very successful day with lots achieved. 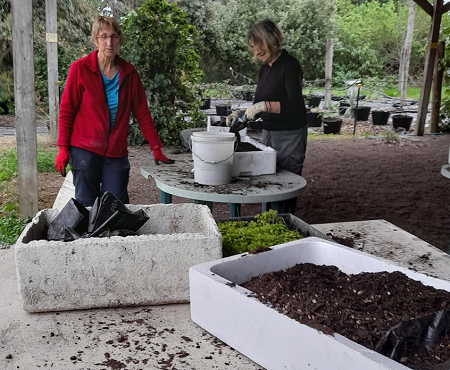 Marjet Pot and Ann Hatherly potting up in the nursery. Photo by Fiona.