Little Spotted Kiwi is the smallest of the kiwi species and was the first to become extinct on the mainland in the early 1980’s. Its feathers are pale and mottled shaggy grey. Most LSK live on Kapiti Island, but new populations are being established on island sanctuaries (such as Tiritiri Matangi and Motuihe) and at Karori Sanctuary, in Wellington city. The number of little spotted kiwi dropped to about 1000 birds in 1980, but since predators were removed from Kapiti in 1998, the species has begun to recover. Little Spotted Kiwi are classified by DOC as “at risk, recovering”. Total population was estimated at 1800 in 2015.

A total of 40 Little Spotted Kiwi (LSK) were transferred from Kapiti Island to Motuihe Island in 2009 and 2010. 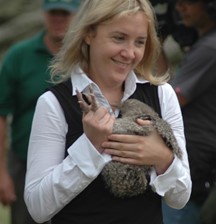 Newly arrived LSK about to be released to a temporary burrow. March 2009. 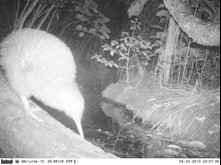 Of these founder birds, three are known to have died and were found dead shortly after the second release.

Monitoring of these birds has been undertaken by informal call-counts, trail camera observations, surveys by Rogan Colbourne (March 2012), a dog team (With a nose for Conservation 2017) and most recently Tamsin Ward-Smith and Kay Griffiths have trained a dedicated team of volunteers (2017) to carry out a formal call-count survey which will be repeated each year. 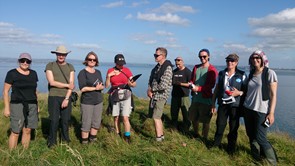 Tamsin and Kaye with the LSK monitoring team checking Bald Knob as a listening site, 2017. 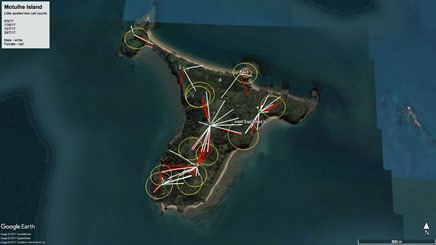 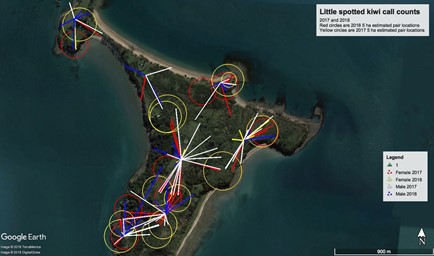