Since 2009, a number of native gecko and skink translocations to Motuihe Island have taken place.  Moko and copper skinks already have an existing population on the island.  As the bush regenerates develops, the populations and spread of these will increase.

Shore Skinks (Oligosoma smithi):  69 were translocated from Tawharanui Peninsular in 2009.  They live in sand dunes, often found around or under driftwood at high tide and other debris and active during the day.  They feed on sand hoppers or small insects found around the shoreline.  Skinks are characterised by a smooth shiny skin with overlapping scales, narrow head, smooth narrow toes and small round pupils with movable lids.  They shed skin in pieces rather than whole.  Rather than laying eggs, gravid females give birth to live young. (DOC Media Release)

Tuatara (Sphenodon punctatus):  60 were translocated from Lady Alice Island, Northland in 2012.  Rare, medium-sized reptiles found only in New Zealand. They are the last survivors of an order of reptiles that thrived in the age of the dinosaurs.  Their diet mainly consists of invertebrates such as beetles, weta, worms, millipedes and spiders.  They come in a variety of colours from olive green, charcoal to reddish brown.  They shed their skin annually. (DOC Media Release) 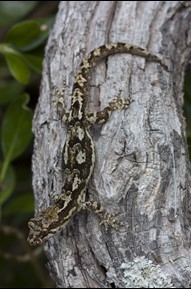 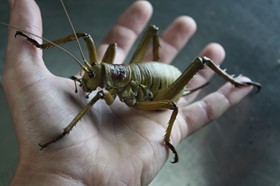 Little Barrier Giant Wētā or Wētāpunga: (Deinacrida heteracantha):  Approximately 1500 are scheduled to be translocated to Motuihe Island mid to late 2020.  These have been bred by Auckland Zoo staff. Survived only at Little Barrier initially and endemic to New Zealand.  Female wetapunga are larger than males and can reach a weight of 35 grams. Moulting is necessary for them to grow in size and can take up to 11 moults before maturity.  It can take up to two years for them to become adults. They commence breeding 1-2 months after maturity. Females will lay eggs throughout adult life, generally producing 100-300 eggs.  Large flightless weta feed mainly at night.  They feed on fresh leaves and prefer native plants with large leaves such as karaka, karamu, māmāngi, māhoe, and kohekohe.