In NZ, many native birds nest on, or close to the ground which allows cats, dogs, stoats, rats and mice to prey on eggs and juvenile birds. With the eradication of these mammal pests from Motuihe, and the extensive tree planting on the island which has increased the natural food sources for native birds, several endangered bird species have been reintroduced, and are thriving. 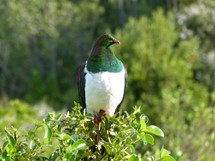 NZ Wood Pigeon - Kereru:  Existing small population are now thriving, and frequent the older bush with larger trees. The kererū are big enough birds to swallow large fruit, such as those of karaka, miro, tawa and taraire and disperse the seed over long distances. They will also browse on leaves and buds. Their wings make a very distinctive "whooshing" sound as they fly. They nest in trees, laying a single egg in a flimsy nest constructed of a few twigs thrown together.

North Island Saddleback - Tieke:  Are not normally found around Auckland. 20 were translocated in 2005 from Tiritiri Matangi, and tieke are now commonly seen and heard across the island. Their loud ts-ts-ts-ts sound is a call warning other birds of your presence.  Glossy black plumage with a chestnut saddle and red wattles.  They nest in tree cavities, rock crevices and in dense ground level vegetation. Artificial nest boxes were used initially after release on Motuihe but rarely used by Tieke. Food source is invertebrates, fruits and nectar. (Motuihe Translocation doc) 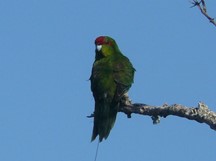 Red crowned or red fronted parakeet - Kakariki are a small parrot with green plumage with red markings on its head.  30 were translocated from Little Barrier Island  (Hauturu) in 2008, and can now be seen daily swooping through the older bush on the Tieke track and their chattering can be heard as they fly across the island. Kakariki are known to breed year round and feed on a variety of food items.  (NZ Herald article) 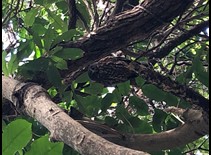 Bellbirds - Korimako:  50 were translocated from Tawharanui and Tiritiri Matangi in 2010. Are a little harder to see as they live within the forest areas and blend in with the native bush colours.  Are now increasing in numbers on Motuihe each year.   Their bell-like song is sometimes confused with that of the tui. Breeding occurs from September to January. Like Tui and Stitchbirds, Bellbirds are a nectar loving bird but will also feed on fruit and insects.  They have a curved bill and a long tongue which is used to reach into flowers and drink nectar. (DOC Media Release)

Little Spotted Kiwi (kiwi pukupuku):  NZ’s smallest kiwi. 40 were translocated from Kapiti island in 2009 and 2010.  Bushnell camera footage has shown unbanded birds so breeding has been successful.  A monitoring programme is run by Motuihe volunteers each year to plot kiwi calls at night to help in the estimation of current numbers and spread of our little spotted kiwi. Food source is grubs and other small insects along with sandhoppers.  As their eyesight is very poor they depend on their sense of smell, long beak and claws to find food.

Acknowledgement and appreciation to Air New Zealand for transporting our 40 Little Spotted Kiwi from Kapiti Island at no cost to the Trust.

Whitehead - Popokotea:  40 were translocated from Little Barrier Island (Hauturu).  This bird species fly in flocks in the canopy of the forest.  The diet of whiteheads is primarily insects although they may supplement with the fruit off mahoe and mapou. Whitehead build their nests above ground between 1 and 15 metres.

Morepork - Ruru:  Existing small population on Motuihe.  Their haunting call may be heard in Orchard Bush from dusk and throughout the night.  Morepork are nocturnal and will hunt for invertebrates, beetles, weta, moths and spiders.  They have been known to catch small birds, rats and mice.  Speckled brown with big yellow eyes, a short tail, acute hearing,  sensitive to light and can turn their head 270 degrees.  Females are larger than males.  By day they roost in tree cavities or in thick foliage.  Birds such as Saddleback will send out warning calls to their partners if a Morepork is in the vicinity.