"The Rock" Reunion
On 14 February 2020 an event was held on Motuihe to remember all the men who served in the Navy on Motuihe. A large group of veterans (approximately 250) traveled to the island on a vehicular ferry which landed them on Ocean Beach. They took part in a ceremony to unveil two memorial plaques honoring the men who served on the island. The plaques are located at the site of the original flag pole which was at the centre of the navy base. The men affectionately called Motuihe Island "The Rock". 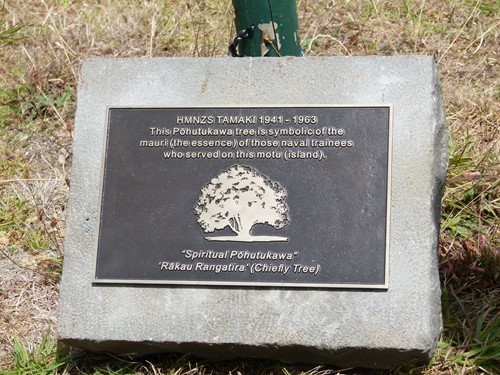 The two plaques commemorating the men who served in the navy on Motuihe. The bottom plaque has a pohutukawa tree in front of it planted as a living memorial. (click photo to enlarge)

With the outbreak of World War II and the urgent need to train more naval personnel, the buildings at the northwest headland on Motuihe were converted into a navy training establishment during 1941, named HMNZS Tamaki.

Motuihe Island was considered an ideal site for a naval training establishment: it was close to Auckland, yet separate from its distractions, provided facilities, and had a beautiful physical setting. Navy Training base on Motuihe in 1962 (click photo to enlarge)

The twenty-two old quarantine buildings, which could accommodate 287 people, formed the nucleus of the facility. In order to accommodate more naval cadets, between 1941 and 1943, fifteen new buildings with a total floor area of 63,500 square feet were constructed including a provision store, a naval and clothing store, a canteen, a gymnasium and chapel, a school, a signal instruction building, a hospital, a dental clinic, and four large dormitories. Total accommodation was now 517. More than 6000 recruits passed through Tamaki during the 22 years it operated, including many who served in World War II. Cadets typically stayed here for their 3 months initial training after entering the navy, during which time they were “broken in” to the navy way of life. Among other things, they sailed Whalers (large open boats), slept in hammocks and sometimes ate their food straight off the table – no plates. The fuel to run the base came from coal which was transported from the wharf using carts that ran on rails – still visible near wharf.

The navy base continued in peacetime to be used for basic training in seamanship, fitness and discipline. In 1963 HMNZS Tamaki moved to the North Shore and the base reverted to Domain Board control.

Des Townson, well know Auckland yacht designer and sailor, was a cadet on Motuihe in 1953. He describes his experience (link)

When the navy vacated in 1963, most of the approximately 70 buildings were demolished. Many were bulldozed over the cliff and remnants of cups and saucers could be found for many years on the rocks below. Some were also moved off the island. Les Chapman, a long time resident of Rakino Island, confirms that the public buildings on the wharf at Rakino came from Motuihe in the 1960s. They have been extensively rebuilt The cost of demolishing the water tower was considered too high so it was left standing. It could now be considered an historic feature, but its future remains in doubt given the danger it poses and the cost of preserving it. The concrete pads near the water tower are the site of the naval flagpole, shown on some of the photos. Tony Slark and his wife Eileen on Motuihe Wharf. Tony was the last Naval Surgeon and he and his family lived in the cottage. Tony was the first and only Patron of the Motuihe Trust. He became an expert in preventing the "bends" for divers. The Naval surgeon's cottage when in use and now derelict. The water tower used to hold salt water for fire fighting now derelict and in a dangerous condition.

Click here for extracts from documents about the Navy leaving Motuihe

During the navy period the larger portion of the island was farmed and maintained by sheep and fat cattle by farm manager Darryl Cotter on behalf of the Auckland City Council.

1968 - HMNZS Tamaki is gazetted a recreation reserve, and control of Motuihe passes to the Hauraki Gulf Maritime Park Board.  The Farm house and Top House date from this period. In 2016 the only buildings remaining from the Navy time are the derelict naval surgeon’s cottage and the water tower which is in a dangerous state.