Motuihe has been a farm from the time it was purchased by Campbell and Brown in 1843 right up until the stock was removed to make way for the restoration of the native bush in 2005.

From 1930 to 2005 the island was leased by the Department of Lands and survey and by DoC as a concessionaire farm. During the period, apart from during WWII the beaches of the island were able to be used by the public for recreation. The island was essentially a farm-park. Concessionaires would farm the island with a combination of cattle and sheep and a proportion of the profits would go to maintaining visitor facilities, such as fences and the wharf. In 1950, the 5,000 pound profit from the farm enable the wharf to be extended.

During the 1970s and 1980s weeds and pests (rats, mice, rabbits and cats, fortunately not possums) became a problem. In the 1990s, Ronnie Harrison, who was the kiosk manager on the island from 1984 and who later farmed the island with her partner Terry Gibbons, discussed with DoC the possibility of restoring the forest on the island. DoC was skeptical as they felt it was too far gone with pests and weeds. The island was surveyed using the Macleans scale that measures rabbit infestations. On a scale of 1 to 10 the east end of the island was an 8. Rabbits were on every part of the island. Fullers sponsored an attempt to control the rabbits with Tree Pal however it failed, the rabbits were so hungry they ate the Tree Pal. 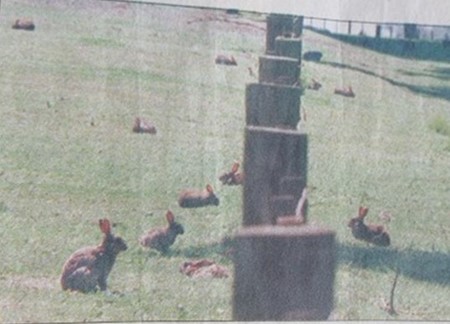 In 1993 and 1995 programmes had been carried out to remove the rats and mice. However the rabbits and cats remained. Ronnie made many applications to get help with the pests and was finally successful after forming the Motuihe Trust in 2000. It cost DoC hundreds of thousands of dollars but they found the money. Magtoxin and 1080 carrots were used. The island was closed for 3 months. There were a few rabbits left and Don Thompson, a trapper was employed with his dog and he shot the last rabbit. Also 32 cats were destroyed. It was Don’s determination to get the last rabbit that made the eradication programme a success. The whole eradication programme took 18 months and the restoration project would not have worked without it. The island was declared pest free in late 2003 early 2004. Click here for Ronnie Harrison's memories of Rabbit control. 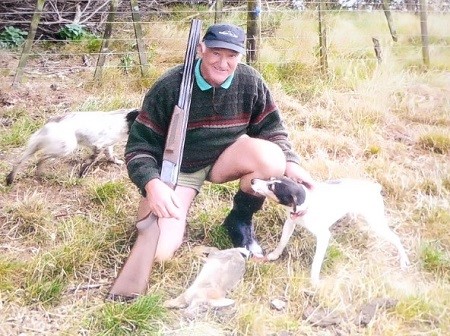 Don Thompson rabbit eradicator. It was his determination to get the last rabbit that enabled the restoration project to go ahead. (click on photo to enlarge)

Fortunately farmers over the years had fenced off three areas of native bush, Orchard bush, Von Luckner’s bush and Taraire bush. Although not huge areas, the mature trees that survived have provided the seeds for the cultivation of the trees used in the restoration project. Without the foresight of the farmers, the seed collection programme would not have been possible. The planting project began in 2003 and by 2020 nearly 450,000 trees had been planted. Tuataras, saddlebacks, kakariki, little spotted kiwi, bellbird, whitehead, shore skink have been released restoring the biodiversity of the island.

Weed control is a constant issue for the Motuihe Trust. Contractors are used to tackle the harder tasks like the cliffs (abseilers or helicopter) and gorse. Volunteers regularly tackle the woolly nightshade, mothplant, apple of sodom and rhamnus which was rampant when the Trust was set up. This is a job that will never go away as seeds blow over from Auckland. 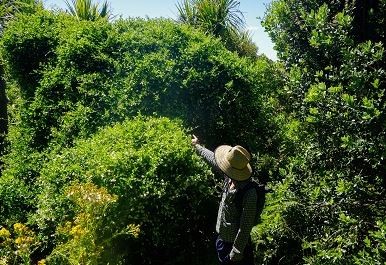 Mothplant smothers trees in the early days of the restoration project.