The commander of the German raider Seeadler, Count von Luckner, and his navigation officer Kircheiss, were interned here after their capture in Fiji in 1917.

In 1916 he was put in command of a sailing raider, the Seeadler (Sea Eagle), with orders to sink merchant shipping, but he became a legend because he managed to wage war while creating virtually no casualties and because of his other exploits.

After sinking several ships in the Atlantic, in April 1917 the Seeadler came around Cape Horn into the Pacific and sank 3 more ships.

In August the Seeadler anchored at the small island of Mopelia in the Society Islands, about 450km from Tahiti. Tradition has it that most of the crew, along with prisoners taken off ships that had been sunk, then went on a picnic.

While they were away disaster struck and the Seeadler was wrecked on a reef. The German crew maintained that this was the result of a tsunami, but the prisoners later said that it was just the combination of the wind and the tide (a situation that would probably have led to Von Luckner and other crew members being court martialled if they had returned to Germany).

Von Luckner took a 10 metre open boat from the Seeadler and, together with five of his crew, sailed 3,700 km to the Fijian island of Wakaya, where he was eventually captured and transferred to Motuihe.

Although he raided seventeen Allied ships, of which fourteen were sunk, and took 237 crew captive, he rarely resorted to force. Only one life was lost as a result of his endeavours, and even this was accidental. 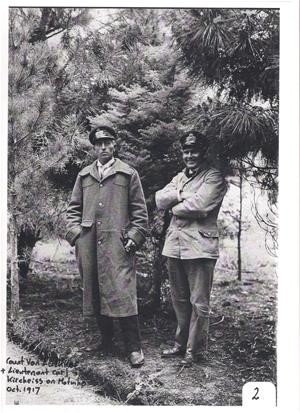 Von Luckner on Motuihe with Lieutenant Kircheiss his navigation officer.

On the evening of 17 December 1917, von Luckner and Kircheiss escaped from Motuihe with nine others, including five of the cadets and a Telefunken engineer, who lived in tents and huts near the trees behind the barracks building.  At a prearranged signal after the arrival of the Camp Commandant in his launch (he was accompanying his daughter, who was visiting the island), they all converged from various buildings (von Luckner was in the Governor’s cottage) onto the old wharf at the bottom of the hill and stole the Commandant’s launch, the Pearl, reaching the Mercury Islands by the following morning.

In order to divert attention from the escape bid, von Luckner requested permission to put on a Christmas play so any preparations for the play could be a disguise as preparations for the escape. The sails for the boat were made from a stage curtain, hand grenades were manufactured out of tin cans and gunpowder obtained by the farmer to blast tree roots, chickens were killed and preserved (the increase in deaths being blamed on disease), and the German naval flag was made out of a sheet.

The telephone wire was earthed to cut off contact with Auckland, the dingy was destroyed to stall any pursuit, the Pearl was packed with provisions and the motor was prepared for the long journey. A cart was then taken down from the northwest headland as a signal for everyone to board the boat and they left in the early evening without a hitch.

Their goal was to get as far away from Auckland as possible, then commandeer a suitable vessel to get them to the Kermadec Islands, where they would raid the New Zealand government’s stores for provisions, then sail back to Germany via South America.

Von Luckner’s escape from Motuihe created headlines in New Zealand and around the world because of its audacity and established von Luckner as a folk hero in New Zealand.

Boaties in Auckland volunteered to help with the search, and the official New Zealand patrol consisted of 29 craft (Bade, 2006).

From the Mercury Islands, von Luckner and his fellow internees commandeered the scow Moa and made it as far as the Kermadec Islands, some 1000 kilometres northeast of New Zealand, before they were captured by the New Zealand Government vessel, the Iris, on 21 December 1917.

Von Luckner and Kircheiss were then interned on Ripapa Island in Lyttelton Harbour, before being returned to the Motuihe barracks in May 1918, where they remained until the November armistice that ended World War I.

There is another story of a second planned escape attempt, although it is doubtful whether it was actually going to be carried out. The plan was to place enough supplies in a cave on the island so that several internees could hide there for a couple of weeks and pretend they had escaped. Once the search for them had been scaled down they would capture another vessel and escape. However, the armistice came and an escape plan was not needed. It is believed that some of these supplies may still be in the cave, but rock has collapsed over the entrance and the cave is now filled with sediment.

Lieutenant Colonel Charles Harcourt Turner was the commandant of the internment camp for most of the war. The escape by von Luckner changed everything for him.

On the 13th December he returned from Auckland at 6 pm in his launch “Pearl” with his daughter. The launch should have been put on a mooring but was left tied to the wharf. The escape took place at 6.15 pm in daylight. Turner was immediately suspended for culpable negligence due to the inadequate arrangements for ensuring the security of his launch. There was a court martial. His defence said that von Luckner exploited Turner’s good nature. His friendly, relaxed methods at the internment camp had been adequate for the years he had been the commandant. Also he was under staffed and the army had actually reduced the number of personnel on the island not long before the escape. Turner was dismissed from the NZ Defence Force.

His successor was Major Samuel Charles Schofield. He ran a much stricter regime. He had no launch, the supply ship was armed and internees were not allowed out of the camp without a guard. Von Luckner and Kircheiss his navigation officer, returned to Motuihe in May 1918 and remained there until armistice on 11 November 1918. They were moved to Narrow Neck in 1919 until they were repatriated to Germany in May 1919.