Power and phone:
Until 1989 Motuihe had mains power. The power came from Church Bay Waiheke to the eastern end of Ocean Beach. The cable broke 5 times in 5 years so State Insurance refused to re-insure it and it was not repaired. The cable was just lying on the sea bed, not buried. About 38 anchors were found by divers during the repairs over the 5 years.

Public phone cable came from Home Bay on Motutapu to Ocean Beach by the kiosk. The phone was located at the front of the kiosk.
The Post Office established a telephone office on the island on 6 August 1900. Andrew Dickson was the telephonist in charge and the call sign was MTH. During WWI the telephone office was operated by the Defense force staff as part of the internment camp. The telephone office was closed on 8 December 1918 and on 9 December a post office was opened with G F Johnson as postmaster. This was to serve the troops still stationed on the island when it was a quarantine station. The post office continued to operate until 6 January 1941 when the navy took over the island.

Buildings on the North West Headland:
The only buildings or structures surviving on the northwest headland are the naval surgeon’s residence, a water reservoir, a Ministry of Works building and the salt water tower. The former naval surgeon’s house was retained for use by the Sea Cadet Association into the 1970s. It is now derelict. The water reservoir would have been used as a fresh water supply from the two large water reservoirs on the highest point of the island. It was built during the same time as the water tower in 1941. The water tower was used to store salt water for use in toilets and for fire fighting purposes. The cottage was brought to Motuihe in the 1940s and housed the successive naval surgeons for the camp. The last surgeon to occupy the cottage was Tony Slark and his wife Eileen and their young family. Tony, who died in 2004 was the Trust’s first patron. He was a pioneer in the understanding of the medical effects of deep sea diving and the treatment of conditions such as the bends. 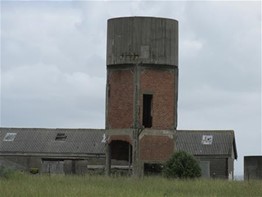 Kiosks:
The Motuihe Canteen was built on the isthmus by Auckland City Council in 1949. The kiosk was a well known and popular stopover for boaties, selling burgers, sandwiches, ice creams and bait until it was destroyed by fire in 2002. The fire was caused by a wiring fault and the gas bottles ignited causing an explosion. A considerable amount of the history of the island was lost in the fire. Ronnie Harrison, her partner Terry Gibbons and son Michael ran the kiosk from 1984 until the fire destroyed it. They lived in the back of the kiosk. The previous licensee was the Shuttons and before them Mr and Mrs H Morton.

Report on Canteen 1974: - situated on a high knoll at the south-eastern end of picnic ground No.1. - reasonably acceptable siting both functionally and visually.  Colour - brown and yellow with white trims. Condition - average, however space to store stock is inadequate as the canteen manager’s residence is included in the structure. To be replaced. 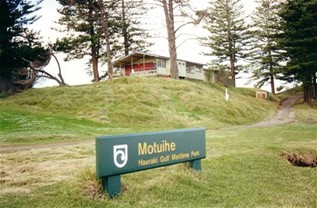 This photo shows the original kiosk on the knob between Wharf Bay and Ocean Beach.

The first Motuihe Project interpretation for visitors was mounted on a purpose built trailer. The DOC rules required that the interpretation information be mobile and not fixed to the ground. In later years the placards were attached around the Norfolk pine tree and then later moved to the Woolshed. The  tipping trailer was a multi purpose heavy duty trailer designed for the information placards, carrying volunteers, and transporting plants, potting mix, and equipment.

An information sign was developed by Louise Cotterall and John Laurence in 2006 and installed at Wharf Bay by the donation box. It was removed in 2022 as the information had become out of date. 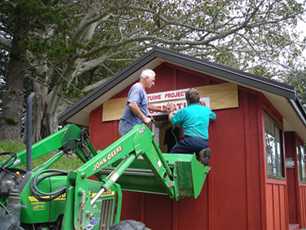 The Trust set up a small kiosk in 2007. It was built in Taupo and trucked then barged on to the island on Dec 2. Sponsored by Mobil Oil. Water comes from a spring-fed well in the gulley behind the eastern end of Ocean Beach and probably dates back to Navy base days. The pump shed on top of the well was re-designed in 1964.  The water is pumped up to the plastic water tanks next to the pond and gravity fed down to the woolshed, top house, rangers house and toilet block.

Toilets:
Original toilets were located on the knoll near the canteen. In 1974 the condition was described as deteriorating and there was a plan to replace the toilet block.
There were two changing sheds and a shelter shed on the beach at Wharf Bay. Again, in 1974 they were described as being in poor condition and needed to be replaced.
The current toilet block and changing shed was built in 1984. A landscape architect, David Tucker was employed to design the plantings around the new toilet block. This photo shows the original toilet block just below the kiosk.

Wharves:
The Motuihe wharf has been a concern for many years. It is exposed to the South West prevailing wind and it has to be very long because of the shallow water in Wharf Bay. At one time it was almost twice its current length. It has been patched up over the years, eg in 2016 extra piles were added for ferries to tie up to and the steps were widened. In August 2019 it was closed and did not reopen until March 2021. Pile 4 was replaced, the decking was replaced and new handrail around the seaward end.

The wharf was rebuilt in 1979 and that is probably when it was shortened to its current length. The original build date is unknown but there are photos dated 1918 with both wharves (the second one being at the start of the rock wall on the beach). There is an aerial photo from 1962 showing just one wharf and it is at full length. This photo shows the old wharf at full length 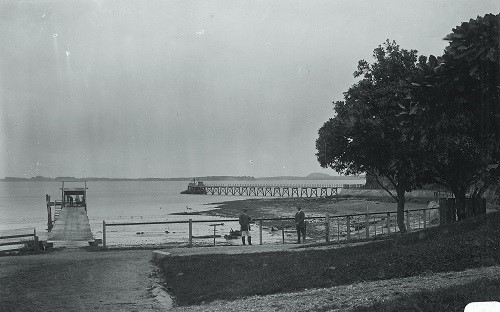 This picture was taken during the First WW. It shows the smaller wharf coming off the beach and the longer wharf.

Note there is no stone jetty. The remains of the beach jetty can be seen today. This picture is the stone jetty that is used unloading equipment. The Trust members call this structure "The Block" and DoC calls it "The Mole".

Motuihe Island wharf is in a state of disrepair and estimates for replacement tend to be high, if not prohibitive.  Repair work is undertaken at intervals to keep the wharf in a safe condition for holiday season use, but the expected life of the wharf at the most is 5 years.

The following article appeared in the Auckland star, in October, 1974:
MOTUIHE WHARF 'DANGEROUS' The wharf at Motuihe Island is dangerous and beyond repair, according to the report of the Hauraki Gulf Transport Improvement Committee. Early approval should be given to its reconstruction, says the report" It adds that park facilities on the island are insufficient and inadequate to meet the needs of visitors.

" Another article appeared in the Auckland star, in December, 1975:

"SECTION OF MOTUIHE WHARF CLOSED
Deterioration and lack of finance caused the outer section of the Motuihe wharf to be closed to traffic yesterday. The chairman of the Hauraki Gulf Maritime Park Board, Mr. J.D. O'Brien, said the wharf would have to be replaced but the board had not been able to obtain from its own or government sources the $200,000 required. Meanwhile, the inner section would remain and be available for public use but the depth of water available at low tide would restrict the type of vessel that could berth there. Mr. O'Brien said the park board had not given up the idea of wharf replacement. The board recognised the important part Motuihe played in the park in providing an island picnic ground easily accessible by public transport.  But the board had to be realistic because there were many demands on public funds. The cost of building a new structure would be high because of the length of wharf required. Special consideration would be given to  picnic areas. This later move has a bearing on the level of recreational use, and also on the type of user.

Roads:
The minimal roading system on Motuihe is inherited from the farming and naval activities on the island. The tarsealed road from the wharf up to the headland was provided for the navy to move gear and personnel. It is currently in quite a deteriorated condition particularly along the foreshore. The road running along the spine of the island is from the farming days. It runs from the narrow isthmus up to the ranger station and on out to the eastern end of the island. It is shingle and not suitable for walking on without shoes. In 1974 it was suggested that it be reformed in material both in keeping with the marine character of the island and for walking on.

Woolshed and volunteer house:
After the Trust was formed in 2000 the wool shed (which was built in 1984) was steadily converted to a nursery over the next 3 or 4 years. The shed still had races and clippers. The first development was the building of the plastic house and the shade house. A new floor was built over the slats where sheep shearing was undertaken. The work station inside the woolshed was built by Brian Alexander in 2017/2018. Ronnie Harrison had been renting the top house out to visitors to the island. Like the wool shed it was developed over the first few years of the Trust with bunks added and the wood/coal stove removed. In 2015 the porch at the back was added and in 2016 the extended deck at the front. Both these jobs were carried out by Steve Nelson a member of the Trust Board. In May 2019 the house was closed by DoC as it was considered unsafe. The accommodation for volunteers and contractors was moved to the woolshed. In Nov. 2019 cubicles were built inside the woolshed and DoC installed a new stove and brought in a shower on a trailer. The shower was later removed and the Trust, with the help of Andy Stuart his friend Cameron, Stuart Macintosh, Paul Taylor, Brian Alexander and Fiona Alexander built a shower at the back of the closed volunteer house in 2020.